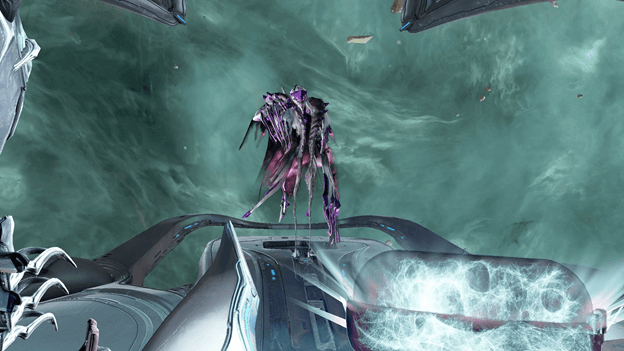 Sevagoth was once the captain of the proud Tempestarii, a Railjack known well for its capabilities when it came to rescuing missions. During one of its voyages, Sevagoth was lost as they traveled through the Void and became lost. However, Sevagoth is still able to use his Shadow to continue to pilot the Tempestarii to search for his body.

An enemy of the Tempestarii has been hunting it ever since a Corpus Captain named Vala Glarios survived one of its attacks and vowed to seek revenge. You must get to the Tempestarii to secure it before Vala Glarios does and once you do, a new Warframe will be added to your arsenal.

You can obtain the Sevagoth Blueprint by completing the Call of the Tempestarii, a solo quest that can be done once you have completed The Deadlock Protocol.

To get Sevagoth’s Parts, you will need to obtain their blueprints from completing Void Storm missions which take place in the Pluto Proxima, Neptune Proxima, or the Veil Proxima:

All of the Sevagoth parts have a 10% chance to drop and will be based on random chances but should be obtained after grinding Void Storm Missions.

Sevagoth can also be purchased pre-built for 325 Platinum from the market, accessible from your Orbiter.

The following are the crafting requirements for Sevagoth.

The following is a list of resources needed to build Sevagoth, their locations as well as our guides on where to farm them.

Completing the Call of the Tempestarii Quest 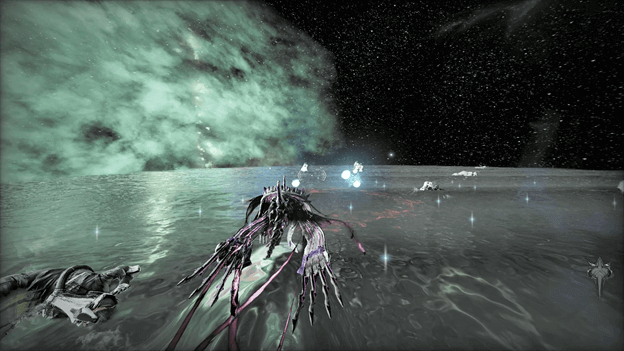 The Call of the Tempestarii quest involves a solo player story that sends you out to go scavenging as you intercept a Corpus Shipping convoy. You will need to salvage the remains of the convoy and will eventually come across the Corpus Captain Vala Glarios.

During your introduction, the Tempestarii arrives and starts to combat the Corpus while Cephalon Cy has you pull out and escape.

After escaping the Tempestarii, Cephalon Cy instructs you to find out what Vala Glarios knows about the ghostly Railjack. You are to head to a Corpus Pillar, which you will infiltrate and collect data about the unknown ship that made an appearance.

You will be performing a Spy Mission within the Corpus Pillar and will have to hack 3 consoles to get data on the Tempestarii, which is unknown to you and Cephalon Cy at the time.

Cephalon Cy uses Orokin-Era distress signals to attract the Tempestarii, allowing you to get near it, long enough to start communicating with it.

As Cephalon Cy attempts to communicate, the Tempestarii will begin to attack you, requiring that you perform evasive maneuvers as he attempts to answer with the right phase.

After communing with the Tempestarii, your presence is requested as the ship lowers its shields and you must head over and board the ghost Railjack. Upon the ship, you will need to assist with recovering lost data as defending it when Captain Vala Glarios arrives to attack. During the attack, your Warframe is knocked out and you enter a different realm where you take control of Sevagoth’s Shadow.

During a dream-like phase, you will fight off Corpus enemies and later on awaken aboard the Tempestarii which is being held by a Beam Generator. You must head within the marked location and destroy the Beam Generator by allowing Cephalon Cy to hack a console. While hacking you must fight back enemies and destroy Jamming Drones.

Once you get back on the Tempestarii after freeing it, you will need to fight your way out until the Railjack starts charging its Ordinances. Once charged you fire these at Vala Glarios’ Ship, destroying it, allowing you to escape, and leaving your enemies behind in wreckage.

As you take control of Sevagoth’s Shadow, this gives you a small demo of how his fourth ability works and gives you a taste of its power. 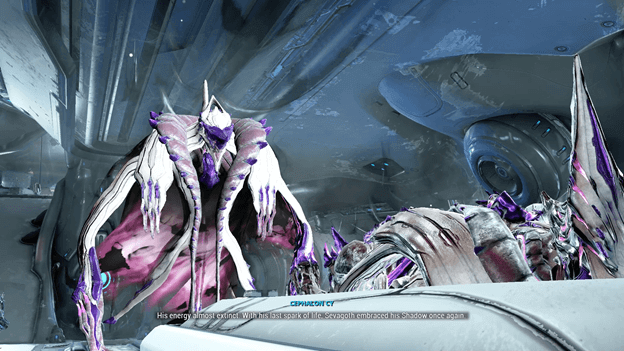 Players will be able to get Sevagoth for free by initializing this quest, mainly getting the Sevagoth Blueprint after completion. All of the other parts can easily be obtained but may take some time to complete during the Void Storms as there is a drop chance to be endured.

While performing Void Storms, it is possible to obtain the rest of the resources that you need to craft Sevagoth’s Parts, making it a two birds one stone scenario. You can take breaks in between the quest after completing each of the steps.

There are a total of three main steps before the quest can be completed, each one of them focuses mainly on Railjack activities.