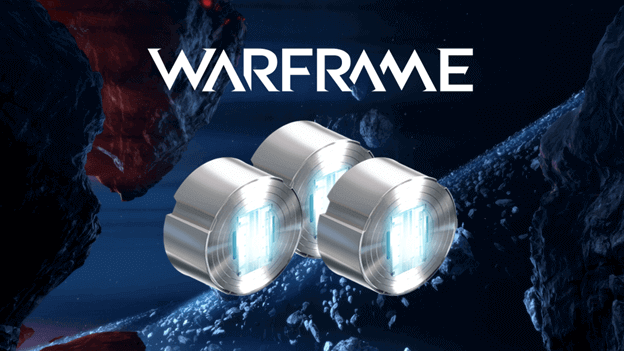 Almost all games have a certain ingame currency that allows you to purchase certain goods or speed up your progress when playing and so does Warframe.

In Warframe, you have Platinum, which is the premium currency used in the game for various things that you want to buy or for speeding up your progression.

How To Get Platinum in Warframe? 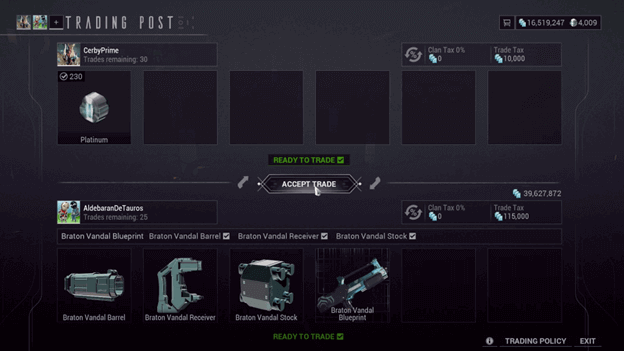 By now you may probably already know how vital Platinum can be in some cases and a lot of people who are starting would like to know how to get Platinum for free.

For those who are wondering how to get platinum without trading, you will be able to purchase platinum directly from the official site and it will go straight to your account.

If you want to buy Platinum in Warframe, you can go to Warframe Official Site and purchase it in different amounts, which also provide you with bonuses.

With that set aside, if you want to know how to get platinum in game and trade-related means, there are some popular ways.

You may also purchase Prime Access or Prime Vault items, including Exclusive Bundles which usually add some Platinum to their packages.

2) Trading Platinum with Other Players

Most players will tend to farm items such as Mods, Rivens, Prime Parts, and more to sell them to other players, which mostly is done through the ingame chat or using a third-party site.

For trading with other players and posting or searching for things to buy and sell, you can check out the Warframe Market website as these have some of the best prices.

With sites like Warframe Market, you can post items you want to sell or view what others are selling and can easily communicate with them using the whisper feature.

From time to time, Warframe will occasionally have contests that let players join in and these have a lot of fun activities for you to do besides playing the game.

Players who win these contests will be rewarded with Platinum, which comes in different amounts depending on which place they are in, such as 1st, 2nd, or 3rd place.

If you’re the type who enjoys watching live streams or loves to witness other players streaming their gameplay and more, you can resort to these and sometimes get freebies.

During Devstreams, you can participate and get a chance to get free Platinum or other rewards, and streamers often give giveaways during or at the end of their stream. 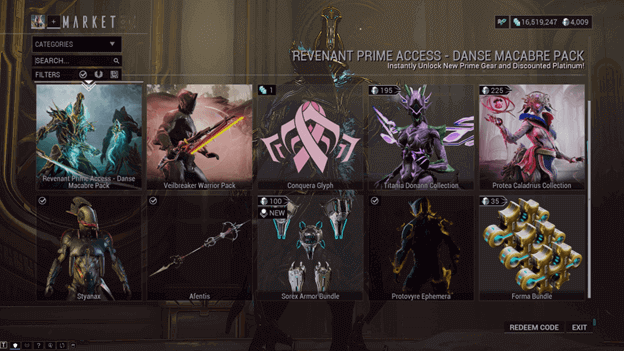 While Platinum is essentially used to purchase items from the Market, it also has a lot of other uses such as rushing buildings in the foundry and for buying cosmetic items.

Players usually tend to sell items for Platinum ingame so they have a good stock to use whenever they need to buy something or make quick progress.

Below are some of the uses for Platinum as well as how much you will need for each transaction within the game.

The ingame market in Warframe has a lot to offer from players, including pre-made Warframes, Weapons, and more.

Using Platinum, you can purchase these, and they will go directly to your inventory, saving you the time of farming resources and waiting for crafting times.

Some of the more popular purchases for players who wish to progress are to buy boosters such as the Affinity, Credit, Resource, or Resource Drop Chance Boosters.

There is a limit to how many items you can have per type in your arsenal, but this limit can be exceeded by purchasing additional slots.

This will allow you to widen your collection of Warframes, Weapons, Companions, and more so that you have a bigger arsenal to choose from.

Currently, these are the possible slots that can be purchased:

One of the downsides to building everything is that there are specific items that may take longer than most to craft.

Those items that are crafted in the foundry do not have to wait for a long time and you can simply speed things up using Platinum.

Once you have used Platinum to rush the building process, it will instantly be complete and you will be able to claim it as soon as possible.

Most players in the game will want a good stock of Platinum and a way for them to earn it is by selling the excess items that they have obtained.

You can use Platinum to get an item that you currently do not wish to grind for and may instead buy them from another player.

This will save you the time of having to go out and collect several resources and blueprints and will help out the other player in return as they earn from it.

Sometimes using the same old name can be dull and you might want to change it from time to time, which can be done with Platinum

You may use platinum to change your character’s name on the official site for 200 Platinum and may even do the same to rename a Clan for the same amount.

Changing a Clan Emblem will cost you 150 Platinum and for those who are a bit picky with their companions, you can change their name at the cost of 15 Platinum.

While almost everything in Warframe can be obtained by grinding for them, the use of Platinum can speed things up so you can do more as you play.

There are also certain items such as boosters that can help you progress faster as you play the game, which is a good thing to save up for when you can.

Platinum is much easier to obtain once you can farm items that are worth selling and there is always someone out there who will need them.