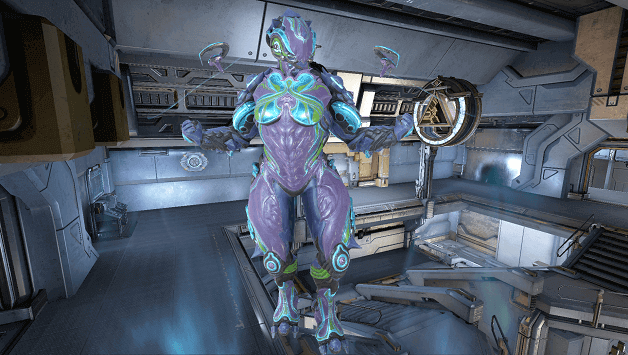 Protecting her allies and raining death down on her enemies, Hildryn the shieldmaiden-themed Warframe goes head-on into battle to destroy her enemies.

This Warframe relies highly on having a greater amount of shields to stay almost invincible in the field of battle and consumes it to continuously destroy enemies.

The main blueprint for Hildryn can be purchased from Little Duck with 5,000 standing when you have reached the rank of Agent with Vox Solaris.

Her component blueprints can be obtained when defeating the Exploiter Orb, dropped when it is defeated.

Hildryn can be purchased for 325 Platinum to skip the need to reach the rank of Agent as well as the Exploiter Orb grinding.

The following are the crafting requirements for Hildryn.

The following is a list of resources needed to build Hildryn, their locations as well as our guides on where to farm them.

The main blueprint for Hildryn may take some time to obtain but you can easily increase your rank with Little Duck to Agent by farming Toroids and exchanging them.

Exploiter Orb grinding can be tedious, which is why you should come geared up and join up with a squad to make things easier.

Once you have obtained all of Hildryn’s components from Exploiter orb and are at the rank of Agent with Vox Solaris, you can purchase her main blueprint and build her.

Hildryn Prime is not yet in Warframe and probably won’t be for quite a while until the others have been introduced into the game yet.

Hildryn is a great Warframe when it comes to heavy defense and high damage, capable of protecting her team as well as destroying enemies.

She can maintain a high amount of shields and can continuously use her Balefire ability when powered with overshields.

While keeping her allies protected and tanking while damaging enemies, Hildryn can lead squads to victory with ease.