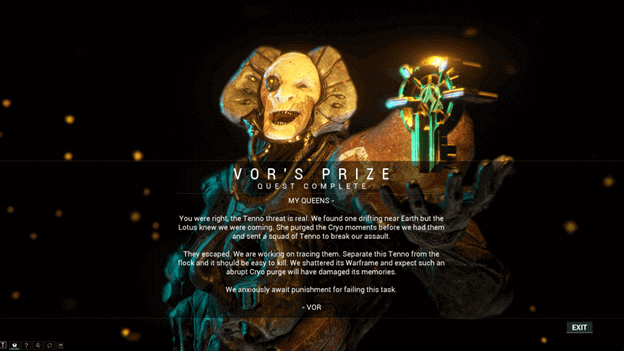 As you have just recently escaped the Grineer in time before they could salvage your Warframe, it appears Vor has installed an Ascaris device onto it.

You have just become reunited with the Orbiter which has already been scrapped and will need repairing by first replacing the missing parts.

During this quest, you will attempt to find a way to remove the Ascaris before it completely takes over your Warframe.

How To Get Vor’s Prize Quest?

The Vor’s Prize quest begins immediately after the completion of the Awakening quest, placing you on the Orbiter which needs repairs. 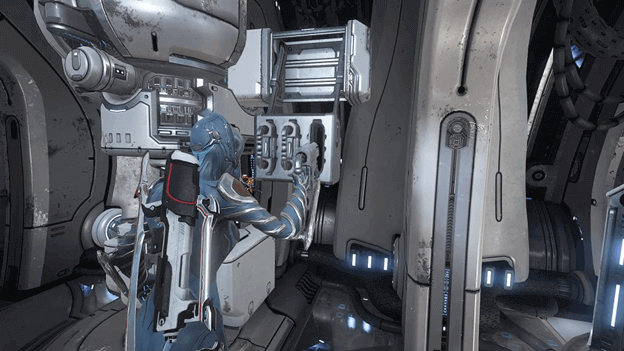 As you arrive in the Orbiter, the quest will begin, and you will need to start by restoring the Arsenal management systems by installing its segment.

This can be found at the back of the ship and will be marked by a waypoint, requiring that you approach and interact with the object.

Once you have installed the segment, approach the Navigation systems, and proceed with finding the parts for the comms by starting the Restore Ship Comms mission.

Completing the Restore Ship Comms mission will reward you with the Comms Segment which you will need to install, this will be marked by a waypoint.

After you have installed the Comms Segment, the Codex on your Orbiter will be unlocked, and the Lotus tells you that you will need to rescue a Corpus defector.

The Corpus defector will be able to help you in removing the Ascaris that Vor has attached to you but is imprisoned in a Grineer Gulag.

You will need to proceed by starting the Liberate the Imprisoned Arms Dealer mission, which can be accessed through the Navigation systems.

After rescuing the Corpus defector, who is later known as Darvo, you will have obtained the Mods Segment for your Orbiter and may install it once you are back.

After you have installed the Mods Segment, you will be able to upgrade your equipment with mods that you have acquired.

Darvo will contact you to thank you for saving him and will tell you about the device that has been attached to you, giving you the blueprint for a countermeasure device. 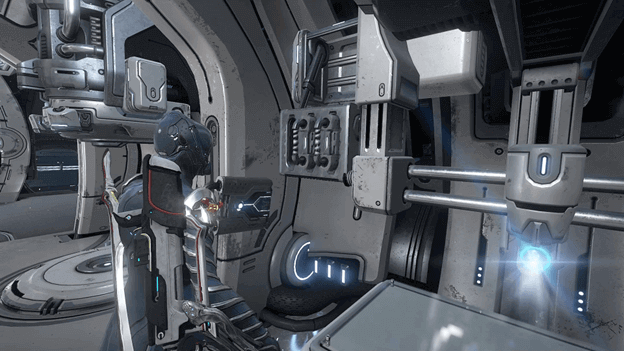 After the completion of the Locate the Foundry Segment mission, you will be back on the Orbiter and will need to install the segment, the system will be marked by a waypoint.

Once the segment has been installed, the Ship Cephalon known as Ordis will tell you that the components have been looted.

Darvo will contact you about Ordis sending him an explicit message (including insults to Darvo’s mother) and tell you where you can find the missing components to craft the countermeasure device.

You will need to begin the Raid the Corpus Resource Caches mission to obtain all the resources needed to build the countermeasure device. 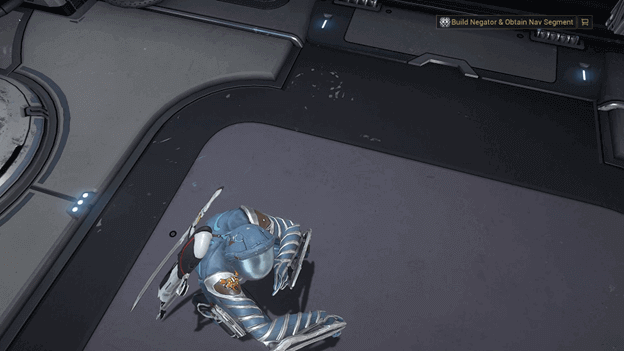 Once you are back on the Orbiter and have obtained the resources needed, go to the Foundry (marked by waypoint) and build the Ascaris Negator, the countermeasure device.

You can speed up the building progress for free and once this is done, you will witness it being removed after closing the Foundry menu.

Now that you have removed the Ascaris, it appears that it had a tempering failsafe and the only way to get rid of it is to find Vor.

Now that you have found the location of Captain Vor, it is time that you confront him to rid yourself of the effects of the Ascaris.

You will need to start the Confront Captain Vor mission, which can be accessed from the Navigation system, and defeat him there.

During the mission, you will need to defeat Captain Vor and once he has been dealt with, the Ascaris detonator he was carrying will have disintegrated, making you safe at last.

To know more about the Obtain the Confront Captain Vor mission, check out our walkthrough here.

During the Vor’s Prize Quest, you will have unlocked several of the systems on your Orbiter which you will now be able to use as you play the game.

The following will now be unlocked, and you will be free to use them: 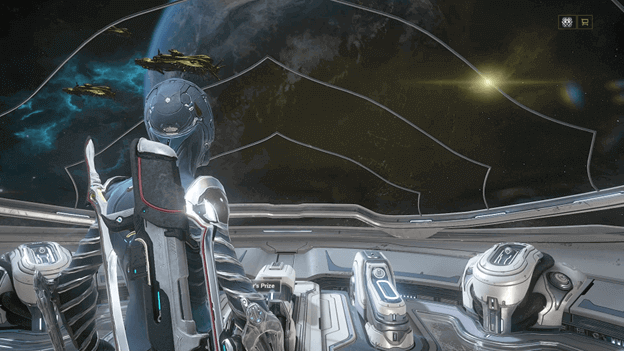 Now that you are free from the Ascaris and have defeated Vor, the Lotus explains that there is more to do, and this begins a grand adventure for you.

As you continue to play the game you will be able to further upgrade your Warframe and obtain more gear to help you progress in the upcoming quests.

At this point, you have been instructed to begin unlocking Junctions to forge a new path and this leads you to, later on, begin the Saya’s Vigil quest.