Pigment is a resource that is collected in order to complete research on dyes that may be used within the interior of the Clan Dojo. Once enough Pigment has been collected, research will be completed and clans will then be able to change the interior using such dyes. Pigments have a slightly different farming routine from most of the resources you would farm in Warframe.

In order to proceed with Pigment farming, we have prepared a guide which will help you understand how to get Pigment and the steps you need to take before farming.

How To Farm Pigment?

Once you have started the research, you may head out and begin farming Pigment. For each dye there will be different Pigments which are dropped by specific enemies. Pigment can be farmed efficiently using farming Warframes and when done in squads.

Where To Farm Pigment?

Once you start the research for a certain dye, the console in the Tenno Lab will display what enemy you should kill in order to obtain Pigment from them.

Farming Pigment by Killing the Enemies 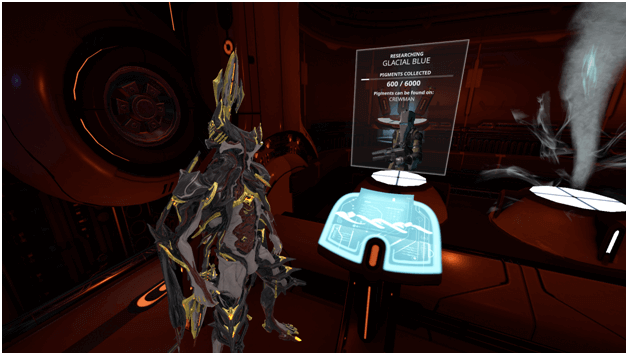 Since the Pigments will drop from enemies depending on which Pigment you have chosen to farm, you will need to target the enemies instead to acquire the Pigments.

Here is a list of the dyes as well as the enemies that drop their Pigment:

Some enemies spawn frequently while others may require more effort to obtain. It is important to know where the enemies will spawn in order to properly farm them. Using your Codex to find the location of certain enemies will make it easier for you to track the locations down. This can be done by heading to your orbiter opening “factions” under “universe” in the Codex menu.

If you have not scanned enemies, entries may not appear. It is suggested that you have a Helios with you for when you want to take easy scans of enemies while you do other missions in order to generate Codex entries for later on.

Most of the enemies in the list will be familiar to you as you progress through the game and since the interior design of a Clan Dojo is not something you focus on early on in the game, this can come later.

The main reason clans would begin research for a certain dye is to use it later on when changing the interior colors of their Dojo. These colors may be changed at any time and reused whenever needed since they will be permanently available after the research has been completed.

In order to farm Pigment for each dye, it is vital to know the location of the enemy that has been displayed in the Tenno Lab. Players who have had a habit of scanning enemies throughout the game or who have travelled with a Helios or Helios Prime may have more entries and will have an easier time.

Not all Pigment colors are easy to farm since some enemies are bosses while others are rare spawns or encounters. Knowledge of the enemies in the game may be important and experience can be a big help to figuring out where to farm the certain Pigments.