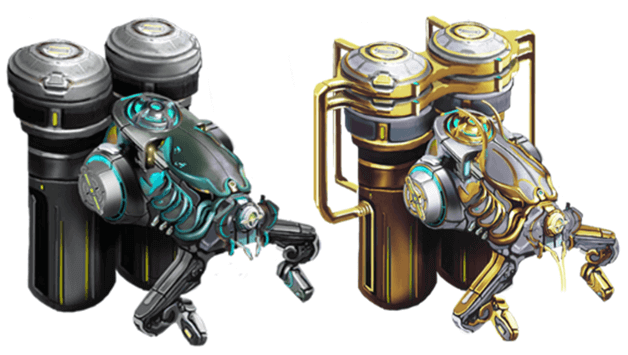 Extractors are special equipment that are used outside of missions. They can be used by players to extract resources from planets which they can collect later on after a period of time. Extractors are mainly used to passively gain resources while players are either offline or doing other missions. There are currently 2 normal Extractors and 2 Prime variants.

The different types of Extractors can yield a different ratio of resources. Players may have more than one Extractor but depending on Mastery Rank, you can only deploy a certain number of them.

There are currently 2 normal Extractors which have Prime variants, making a total of 4 Extractors in Warframe. These are the Extractors that exist in the game:

The Titan Extractor is the most basic Extractor in Warframe which is capable of extracting resources in 4 hours. This Extractor is mainly focused on obtaining all of the resources with a bigger chance to yield the common ones.

Resource chances for the Titan Extractor are:

The reusable Titan Extractor blueprint can be purchased for 50,000 Credits at the market and its crafting requirements are:

The Distilling Extractor is more focused on collecting a higher amount of uncommon and rare resources and takes 8 hours to collect resources. This is mainly used to obtain the rarer resources that players seek out on planets which are harder to farm.

The resource chances for the Distilling Extractor are the following:

The reusable Blueprint for the Distilling Extractor may be purchased for 50,000 Credits in the Market and its requirements to craft are:

The resource chances for the Titan Extractor Prime are the following:

The Titan Extractor Prime was available during Prime Access and were purchasable as well through the Prime Vault purchase. It crafting requirements are:

The Distilling Extractor Prime is similar to its normal version but has a higher chance to collect uncommon and rare resources. It also has a Prime finish on it which resembles Orokin design.

The resource chances for the Distilling Extractor Prime are the following:

This Extractor is usually available when Prime packs are released and requires the following to craft:

Each of the planets have their own resources which can be checked by viewing the Extractor icon on the bottom right of their screen in the Star Chart when viewing a planet. If there is no Extractor icon, select the “Resource Drone” option and it will appear.

Not all planets have the same resources in their drop table and this should be checked before deploying a resource drone to make sure you are collecting the resources that you need. Depending on which resources come first in a planet’s table, its chance to obtain those resources is slightly higher.

The following are the planets and their resource tables:

How To Resource Extractors?

To deploy an Extractor, go to the Star Chart and select a planet you would like to send your resource drone to. Once you have made up your mind about extracting resources from the planet, select the “Deploy Extractor” button. A list of the Extractors that you own will be shown and you can select which one you would like to deploy.

The Extractor will begin to collect resources and will last for either 4 or 8 hours depending on if you are using a Titan Extractor or a Distilling Extractor (or their Prime variants) and you will need to wait for them to finish. Be sure to wait for the timer to complete or else no resources will be collected.

Retrieving the Extractor on time or its health will diminish and it may be destroyed (allows you to scrap it for a small amount of credits) and you will have to make a new one.

The following are the number of deployable drones based on certain conditions:

Extractors are a great way for players to passively obtain resources that they need which also helps yield the rarer resources. You can choose to farm common resources or the more uncommon and rarer ones which we suggest you focus on. This can help you obtain those rare resources you need to reduce how much you need to grind.

Extractors do need to be watched over as they can be lost when not collected after their process is finished. It is a good idea for you to use extractors whenever you can as the extra yield of resources can be beneficial later on.