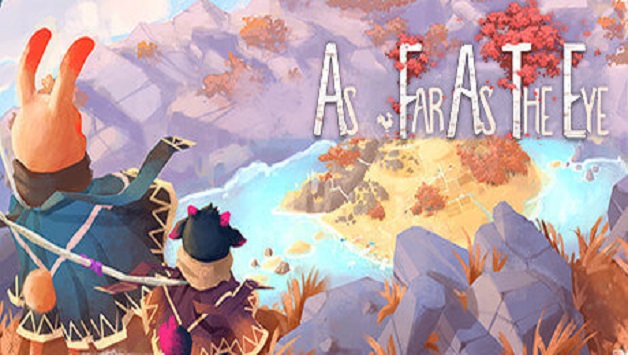 This is a guide on how to start a new game in As Far As The Eye, it explains how to set up food collection and production, how to find and extract resources needed for moving to new maps(called halts) on the road to the safe haven in the middle of the world as you run away from the oncoming flood.

As Far As The Eye is a turn-based nomadic village builder with stunningly beautiful art design and civilization like gameplay, but on a much smaller scale. It’s made by the developers at Unexpected and published by Goblinz Studio.

Your objective in the game is to get your villagers, called Pupils to the center of the world so they can survive the coming flood which will drown all the lowlands. This is an alien civilization on an alien world but the resources are very earth like and aking to medieval times. 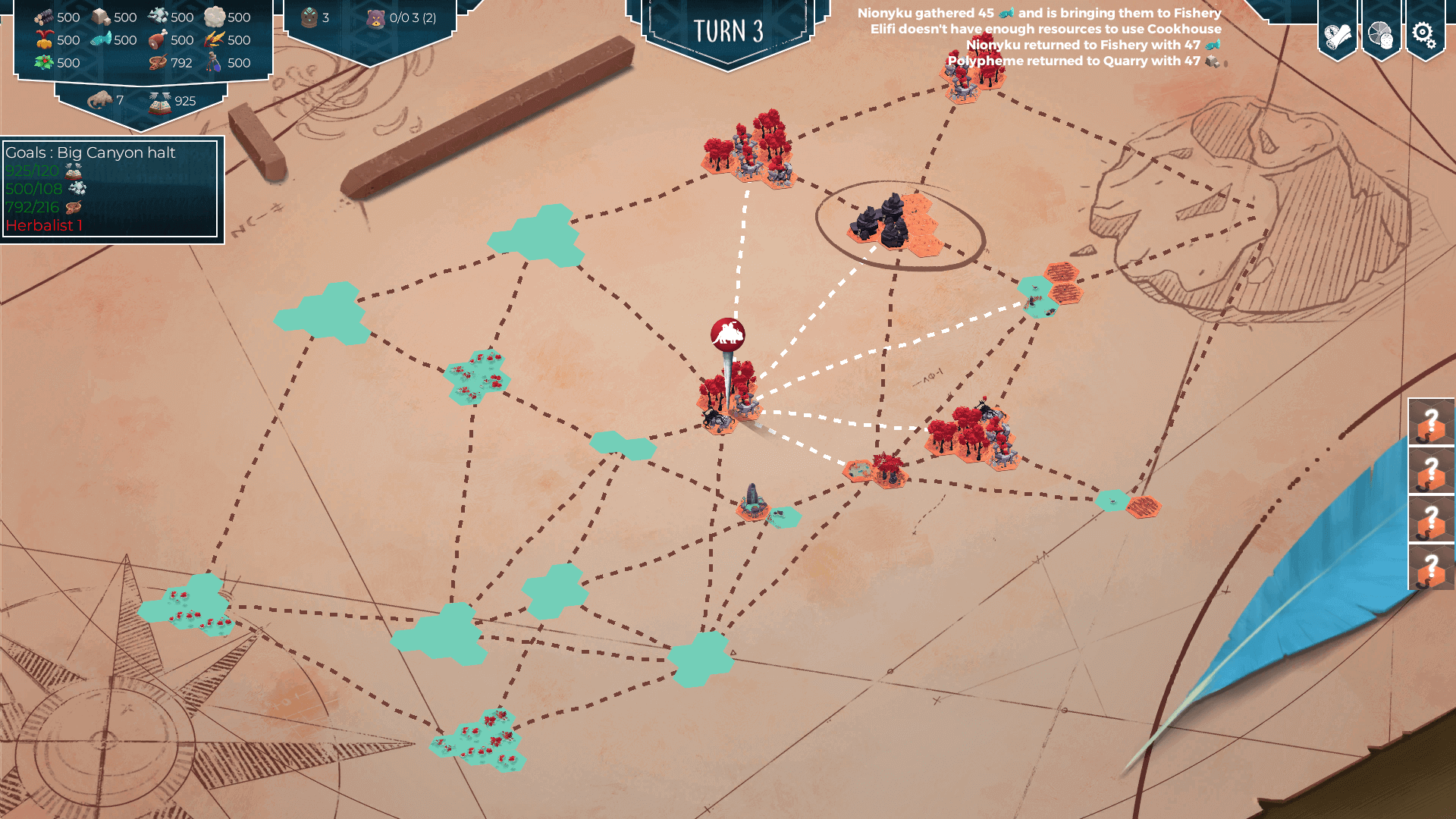 As these pupils move in a nomadic village caravan they stop between each leg of the journey to stock up on food and necessary supplies. Sometimes they need to fix a bridge for example to continue to the next halt so you have to collect more construction oriented materials.

The first thing you have to get used to is that these Pupils are shapeshifters and they change their bodies depending on the task they are given. The more time they spend in a body type, for example a builder shape, the more experience they gain and the better they can get at doing that job.

You can even upgrade Pupils like in an RPG using their Skill Wheel inside which you have separate skill trees for each profession. But to gain the most experience for each profession your pupils have to work through the specialized buildings for each resource. 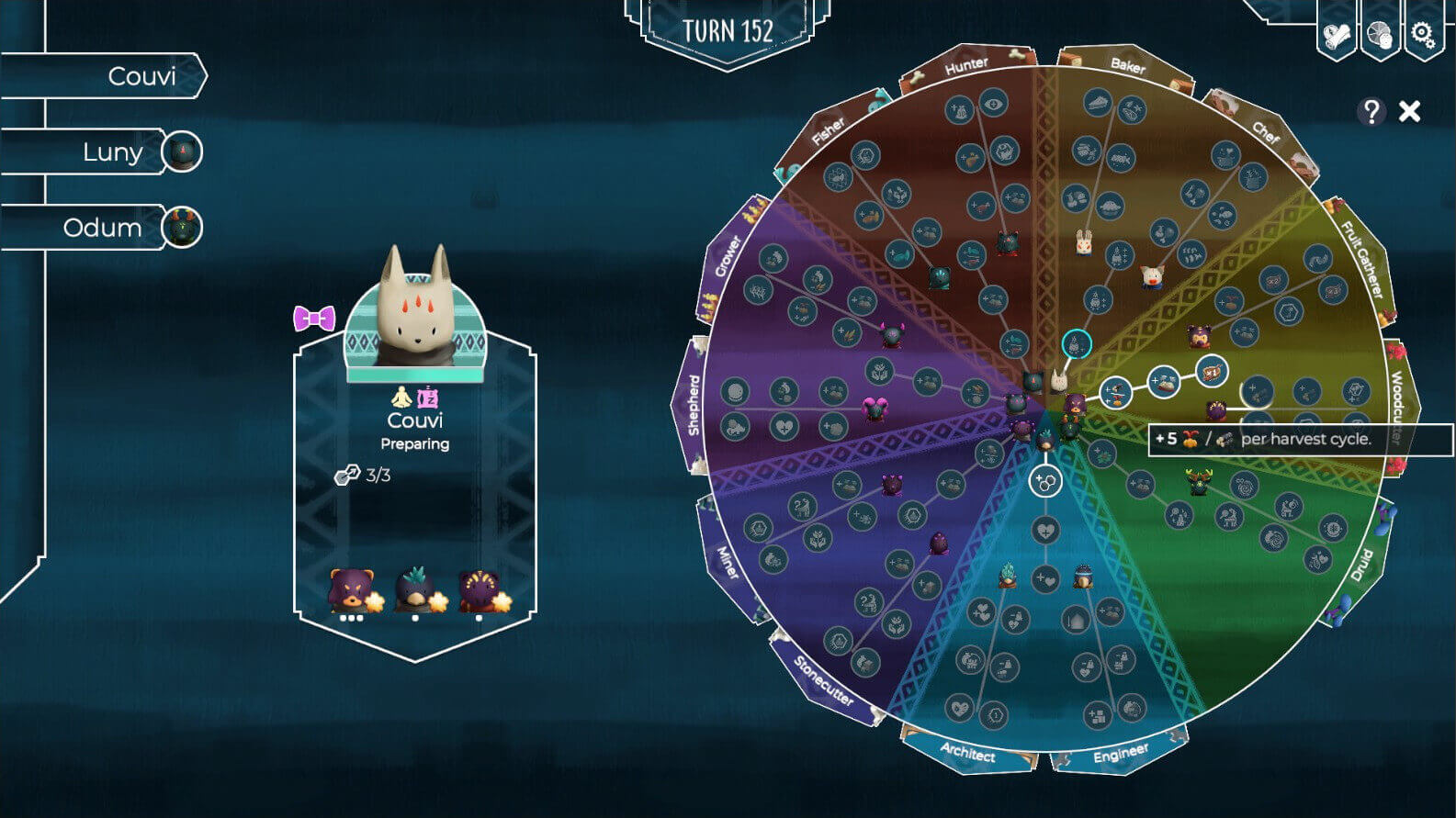 Now that we know all this lets start the Pupils on a new journey towards the center and see what we need to do to keep them alive and reach the journey’s end. Just like all living creatures these also need food to survive. You should specialize one of your pupils as a gatherer of raw food like pumpkins right off the bat and also construct the harvest hut right next to the pumpkin rich hexes. This will let the Pupil earn XP in this profession and once he amasses enough of it you can further specialize him as a fruit gatherer. This increases the speed of collection and reduces travel time.

The more Pupils in your nomadic village the more food you will need so later down the line you will start using farms, growing more kinds of raw food and using a baker, chef or cook to combine different raw food types into baked bread and other meal recipes which will last longer and keep pupils better fed. If you run out of food the pupils won’t die instantly but will lose health each turn until you get them more food or they die when their HP drops down to 0. 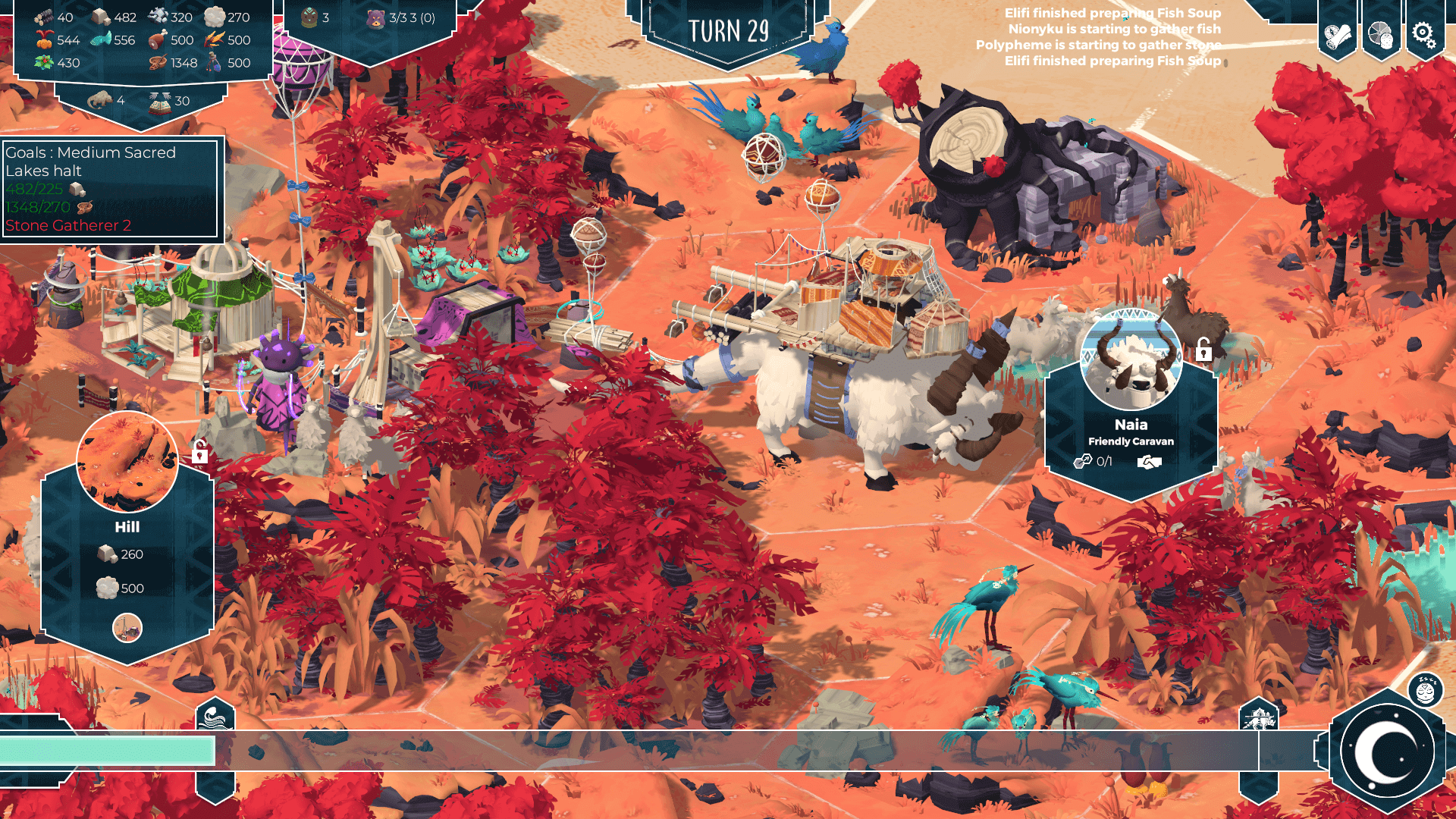 Wood is easy to come by but just as pumpkins each hex will eventually be exhausted of its supply. You should build a sawmill next to several hexes with trees which will be a drop of point for the resource instead of the caravan and will provide XP for the Pupil working there. You can specialize your Pupil who will first be a picker as a Woodcutter and further improve the resource collection.

Is all the same with the rest of the specializations Hunter, Fisher, Stone gatherer, Miner, Shepperd and all several others. Each pupil can be specialized in each profession and then future upgraded by keeping him at the same job and using the appropriate specialized building.

The collector collects wood or pumpkins and brings them directly to the caravan to ensure the subsistence of the tribe.

The fruit gatherer collects pumpkins and brings them back to the harvest hut to support the tribe. He is more efficient at this task than the Picker but he was a Picker long before specializing.

The woodcutter collects wood and brings it back to the sawmill so that it can be used as fuel and building material. He is more efficient at this task than the Picker but he was a Picker long before specializing.

The trapper collects venison and fish which are used in the composition of the rations prepared by a cook.

The hunter collects only venison which he brings back to a hunting lodge. His previous training as a trapper allows him to be more efficient at the task.

The fisherman only harvests fish which he brings back to a fishery. His previous training as a trapper allows him to be more efficient at the task.

The stonemason extracts stone from certain mountains and hills and brings it back to the Quarry for use as a building material.

The miner extracts ore from certain mountains and hills and brings them back to the Mine for construction and improvement.

The farmer harvests wool and cereals, which are used respectively as building material and main ingredient in the rations prepared by the baker.

The grower works on a farm where he harvests cereals which are used to make rations by the baker.

The Shepperd harvests wool by going to take it from the larmas. Wool is used as a building and improvement material.

The cook prepares rations using cereals, venison and fish. He ensures the survival of the tribe.

The chef prepares rations using venison and fish and learns recipes to add pepper and spices to the rations to make them more nutritious.

The baker prepares rations using cereals and learns recipes to add pepper, venison, fish and spices to the rations and make them more nutritious.

The architect designs and builds solid, permanent buildings that consume fewer resources but cannot be transported.

The engineer designs and assembles mobile buildings which can be dismantled and transported from one stage to another.

The herbalist harvests spices and brings them to the pharmacy. Spices are used to make rations.

The Druid collects spices and mushrooms which he makes potions which make it possible to look after sick Pupils. They can also appease the Auras, and analyze the Vestiges and the Sacred Sites.

How to grow and move

When you have basic food like the pumpkins stored and some wood collected you can start using a designated Pupil for building all the other collection or harvesting buildings. You can choose to spend only wood and build a stationary building or spend wool and stone as well to make mobile buildings which you can pack up and carry between halts. The space on the caravan is limited and you have to count on caring over resources as well, so choose what to build and leave behind and what to carry over to the next halt depending on which resources you will need to stockpile when you get there.

You can try choosing your next halt depending on the available Pupils and their skills and the resources you can gather at the current halt but because some halts are hidden on the map until you get closer to them you would know are you heading into a really difficulty path on the map.

You should try to diversify Pupils and your resources so you can get a leg up when you find yourself in a halt which is hard to finish before the turns run out.

Buildings can also be upgraded if you can spare the resources, so if you plan on investing into them do that for movable buildings. 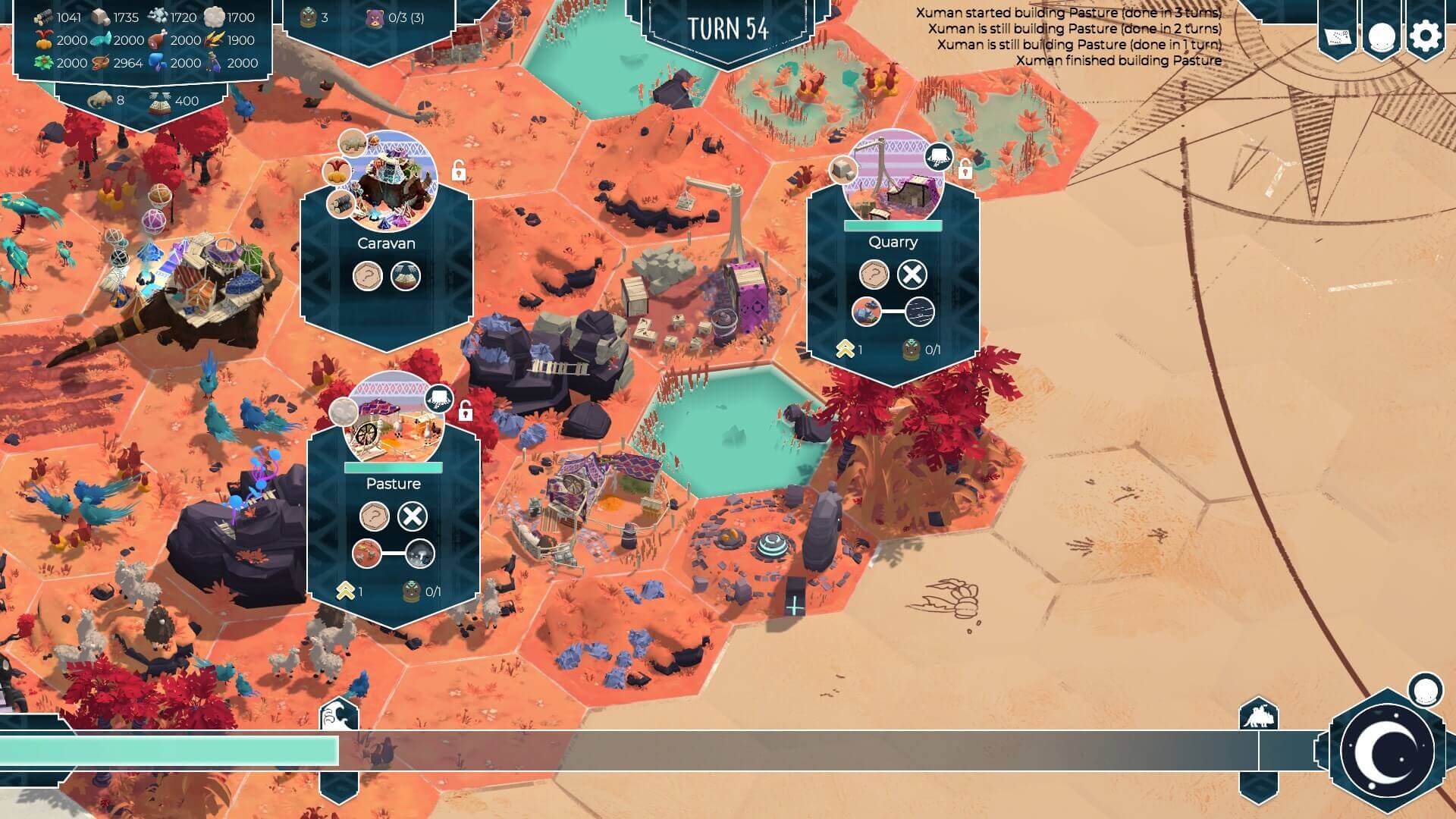 In As Far As The Eye there is a map on which you can always see what will be the requirements for successfully navigating the road from that next halt. When you get there you have to locate and exploit the resources that you will need for the next leg of the journey. Always get the food first or you risk your Pupil dying from starvation.

To increase the size of the caravan, and to be able to have more villagers, you have to find and bring to your caravan more specimens of the Rhinofallos animal which along with some resources can be turned into a camp extension. From time to time you will find new Rhinofallos in different halts as well as new Pupils which you will run into in the remains which are old abandoned structures. You can specialize some Pupils as druids and those will be able to tell which rewards to expect and even remove possible negative effects before you explore remains. 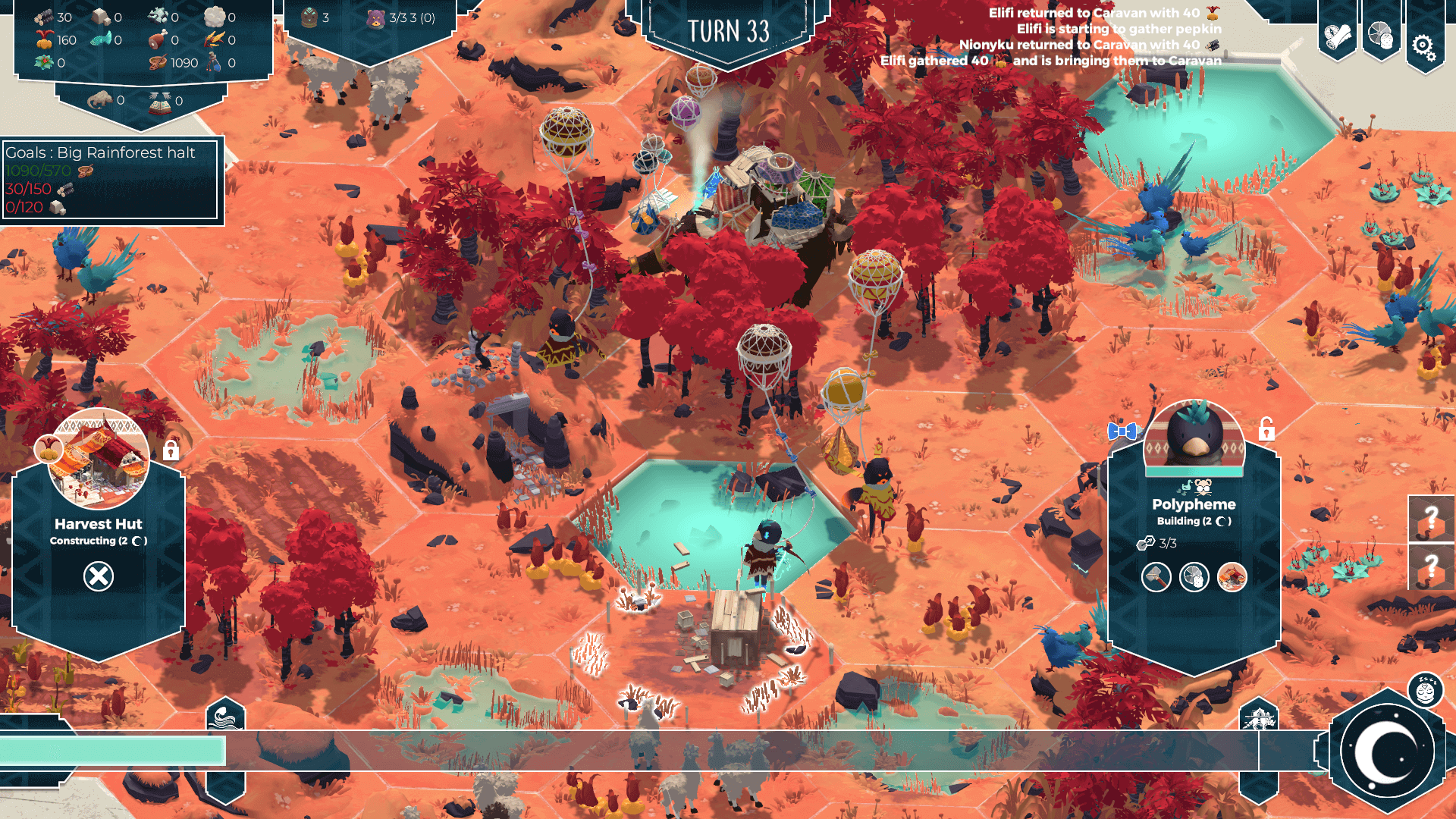 Besides these there are also Sacred Sites that are places of appeal to spirits scattered all over the world. Majestic, they can only be explored once and offer rewards of various natures. You can make offerings in Sacred Sites or plunder them, but never forget you’ll have to bear the consequences of your actions.

Auras on the other hand are natural points of interest bursting with magic. They protect the surrounding nature, going as far as preventing the harvesting of certain resources.

To deal with them, and remains, you need a Pupil specialized as a druid as mentioned above. One of the druids skills is in interacting with the source of the auras, usually big purple tree. Using the druid you have to right click and chose the option to pacify the auras for a limited number of turns. This also takes a number of turns but can be made into a permanent thing by investing in the druids skill tree.

Each step on the journey you are in a race with time as you have a limited number of turns before each halt is flooded with the oncoming tsunami of water. Because of this you have to learn to be very efficient with your harvesting, collection and exploration. Each movement point of each villager is a resource which must not be wasted and everything has to be harvested in the right order just before it is needed. Making a thousand meals will not help if you failed to harvest enough wood to make the mine or quarry which you need to be able to extract stone or ore necessary for the next leg of the journey and reaching the next halt. 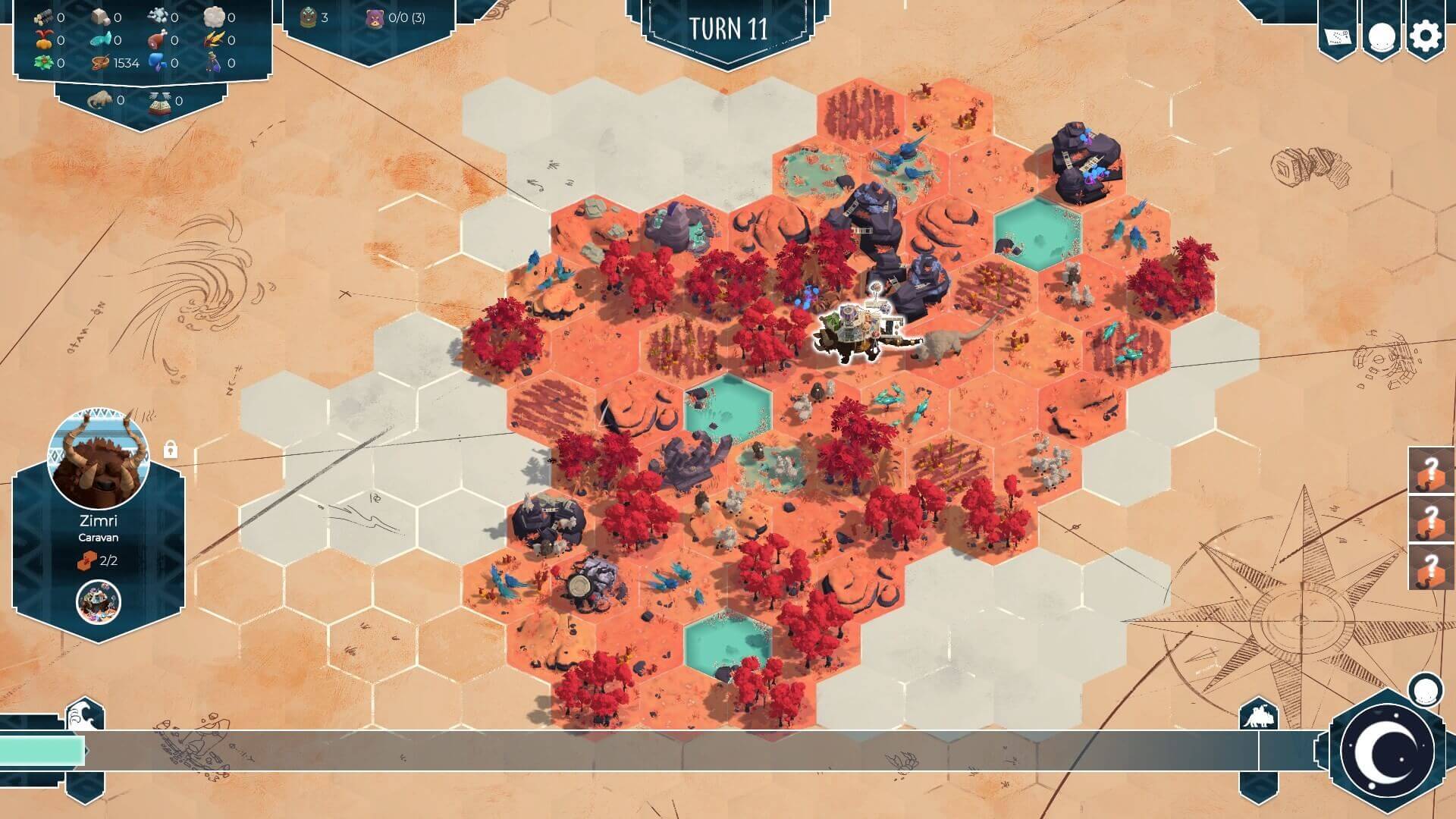 Besides the danger of exceeding the turns limit and getting drowned by the water your villagers will also be hit by certain types of disasters which happened as the wave gets closer. On some occasions you will get a warning telling you what to do to minimize the problems and damage your village or villagers will suffer in the next turn but sometimes there will be no warning and you will have to deal with the aftermath.
Written by: Spector