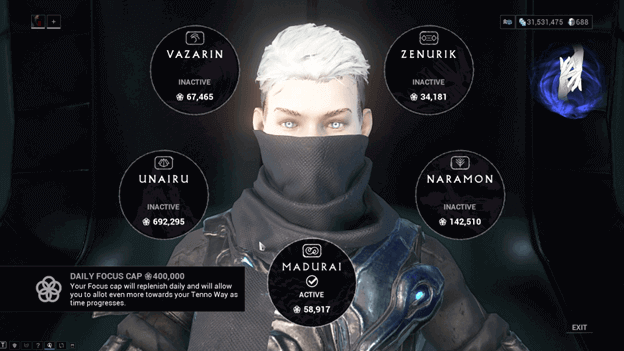 Warframe has introduced a lot of new features in the past, one of them being the ability to use the Operator which surprised many players when The Second Dream came out.

Instead of only being able to use your Warframes, you may now control the Operator, who was piloting them using Transference, using a device called the Somatic Link.

Operators have their unique abilities and giving players more to choose from, different schools affect them.

What Are Focus Schools?

Focus Schools are specific classes for your Operator which allow you to choose which one suits you best when you play Warframe.

Focus Schools in Warframe are unlocked as you progress through the quest and complete The Second Dream quest, unlocking the Operator in the process.

Each of the Focus Schools has its unique traits and background lore which defines why they have certain abilities.

There are 5 different Focus Schools that you can choose from, with each of them having its unique abilities.

Although you may only have one active Focus School at a time, the ability to set some of them to be Way-Bound will allow them to share specific ones.

The following are the different Focus Schools in Warframe: 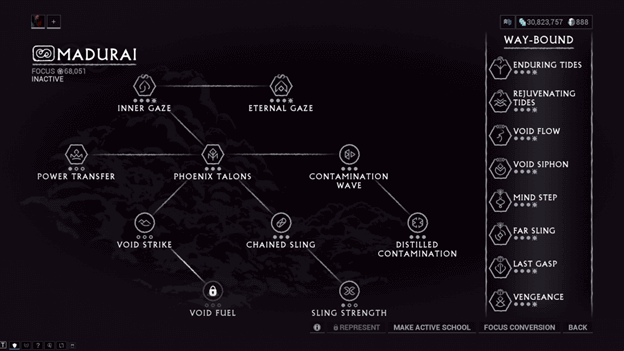 As a school dedicated to offense, those who follow the Madurai ways are unrelenting fights who excel in the arts of ambush and barrage.

Those who are focused on the ways of Madurai are granted predatory and savage power, allowing them to overpower their enemies with sheer damage.

The Madurai ways include the following: 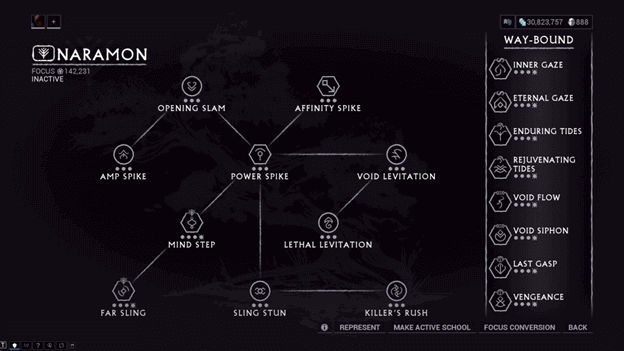 The Naramon focus on knowing their enemy and are known to be Tacticians who believe that to truly understand a foe would be to confer the greatest advantage upon a warrior.

Focusing on the art of assault, they excel in direct combat to dominate and neutralized their foes on the battlefield.

The Naramon ways include the following: 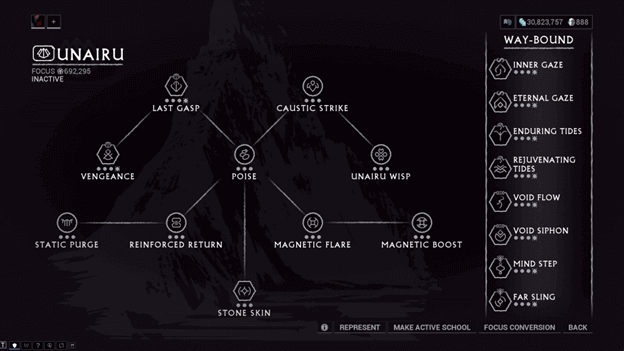 Those under Unairu have pushed themselves to the limits, outlasting enemies to withstand all aggression shun towards them.

They believe that if an enemy cannot match their endurance, a battle may already be won without having even commenced.

The Unairu ways include the following: 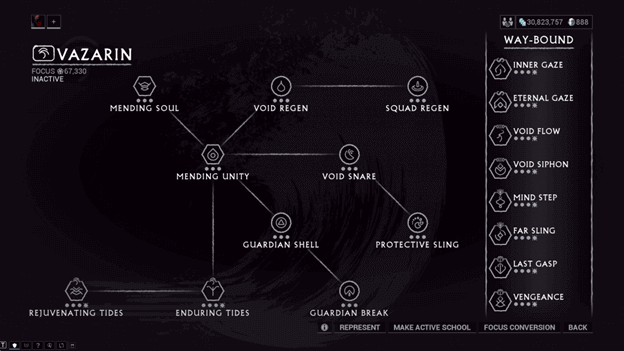 Trained in the ways of countering their enemies, those who go by the way of Vazarin move with their opponent’s attacks to nullify them.

Constant awareness is vital for those under Vazarin to defend against all aggression brought by their enemies.

The Vazarin ways include the following: 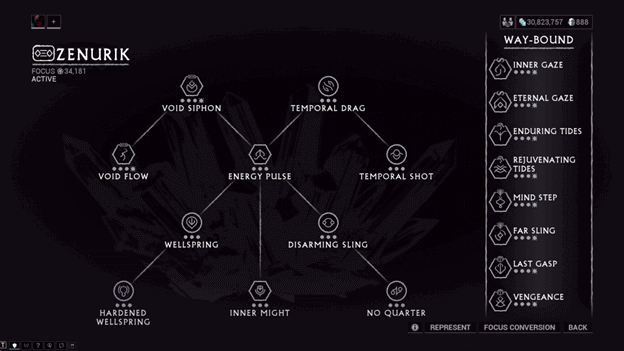 Those who master the ways of the Zenurik school believe that the path to victory is to simply dominate their enemy.

Believing that sheer strength can erase any resistance, they seek to choke their opponents of all resources to ensure victory.

The Zenurik ways include the following:

Way-Bound allows you to unlock a specific Focus School’s way to be activated with other schools, providing you with a bonus based on the way that has been unlocked.

These require Focus Points and a Radiant Eidolon Shard to be unlocked but are worth the trouble of getting.

It is possible to unlock 2 specific ways from each Focus School to be shared amongst the other ones, making your Operator more powerful in many ways.

The following ways may be Way-Bound to share amongst other Focus Schools:

How To Farm Focus?

There are currently two ways for you to obtain Focus in Warframe, which are by equipping Focus Lenses or by Focus Conversion.

Equipping a Focus Lens will allow you to gain Focus by a certain percentage when there is extra affinity gained (equipment is maxed out), adding points to a specific Focus School.

The type of Focus Lens determines which Focus School will gain focus as well as by what percentage it will be gained from the extra affinity.

You can equip Focus Lenses in multiple weapons and your Warframe to gain Focus Points whenever they are used to gain affinity.

There is a daily cap to gaining Focus Points which is 250,000 which scales by 5,000 based on your current Mastery Level. 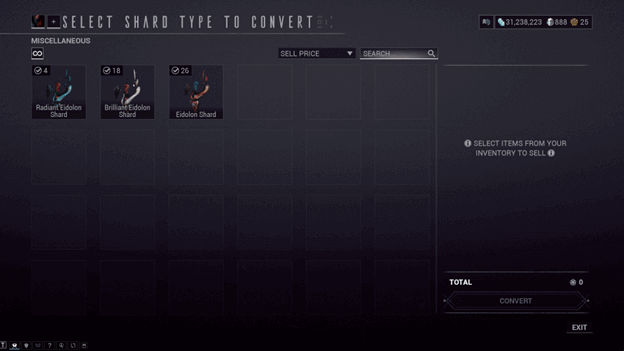 You can gain additional focus by converting Eidolon Shards, providing you with Focus Points that you can use to upgrade your Operator’s Focus Schools.

Focus gained will be added to the specific school that you have selected, which will have the Focus Conversion option when you open it.

The following are the Eidolon Shards you can use for Focus Conversion as well as the number of points they provide. 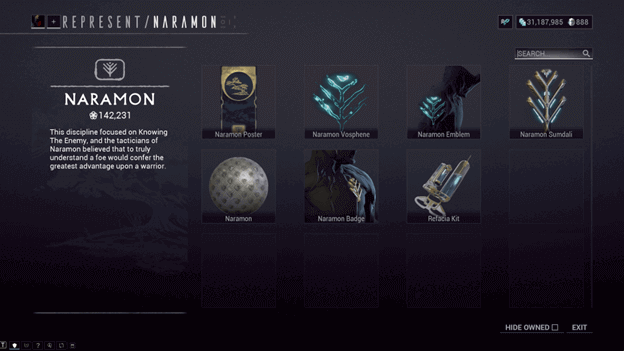 Within the Focus Schools, you will see a Represent section that will allow you to trade Focus for certain items related to the school.

Most of these objects are available to be placed within your Orbiter or Dojo and even change the appearance of certain cosmetics.

The available items in the Focus School represent section include the following and cost 1,000,000 Focus each: 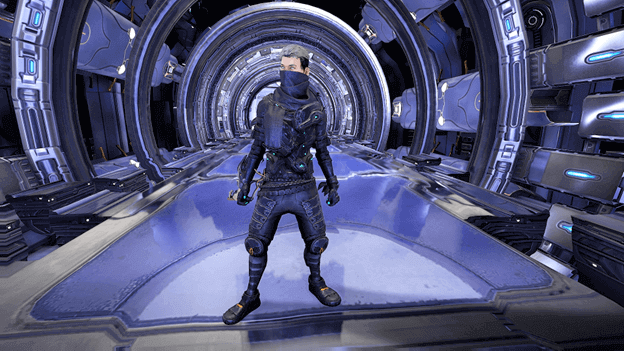 The different Focus Schools allow you to further make your playstyle more comfortable while providing you with a lot of bonuses.

Using your Operator can become essential in certain missions and will provide a better chance of success at certain times.

With the ability to unlock several ways, Operator capabilities can improve greatly, making them even better to use.