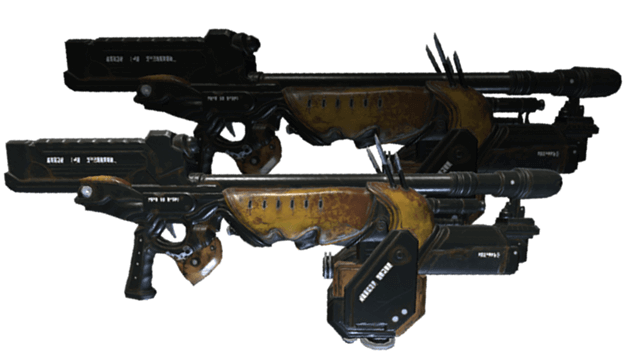 This weapon is powerful but with some manageable negative stats, specifically its poor ammo economy and long reload time. Although, with these flaws, the Twin Grakatas is well loved and has a great following in the game, where those who love this weapon imitate the speech of their favorite Grineer defector Clem.

How To Get Twin Grakatas?

The Twin Grakatas blueprint can be purchased from the market in your orbiter for 20,000 Credits. Once you have purchased its blueprint,  you can craft it in your foundry. On a side note, you would need two fully built Grakatas to craft the weapon but they are not required to be maxed out to be used as crafting components.

The Twin Grakatas is sort of an upgrade to the standard Grakata with twice the fire rate and magazine size with a slight improvement on critical chance but overall it functions much like a standard Grakata, albeit a secondary weapon instead.

This is a critical build on the Twin Grakatas that is a perfect match with its high fire rate and natural multishot. Using corrosive and heat works great for the weapon due to its impact damage priority since impact damage is unaffected by armor and allows it to deal maximum damage while chipping away enemy armor.

Heat will assist with the lowered damage of impact to flesh damage and can proc the burning status effect for more damage over time while weakening the target. Using 90% elemental mods for a corrosive combination gives the highest damage potential while Primed elemental mods will compensate as a single mod compared to two elemental mods.

Primed Target Cracker and Primed Pistol Gambit are used in this setup to maximize the output of the build but standard mods will work just fine for the build. Adding Hydraulic Crosshairs to this setup to allow the best critical chance possible for the Twin Grakatas.

Using viral and heat combinations with this weapon along with its naturally high multishot and high fire rate can stack a lot of negative debuffs on your enemies. Increasing the damage significantly with damage increasing mods and multishot allows you to get high stacks of damage procs of heat and slash.

Adding on both Barrel Diffusion and Lethal Torrent will give currently the best possible multishot for the Twin Grakatas while adding Magnum Force gives a bit of spread to the projectiles of the weapon making it shoot like a high fire rate shotgun.

Seeker and Steady hands can be replaced with other mods for your preference. For this build, Seeker gives a huge boost to punch through to let the bullets of the Twin Grakatas hit multiple targets in a line. Steady Hand lessens the recoil of the weapon to go along with Lethal Torrent.

This build takes advantage of the innate multishot of the Twin Grakatas, shooting out huge bursts of projectiles that can deal massive damage from heat and slash that can be amplified by viral damage. Continuous shots will hemorrhage enemies quickly from the sustained damage, causing even the tougher enemies to bleed out as you reload.

The Maim mod is a great way to push your slash physical damage above the other two physical types while Primed Heated Charge gives a massive boost to heat damage, giving the two great sources of health damage a higher chance to take effect.

Using this build on the Twin Grakatas gives it maximum status chance that can for one blind enemies with blast or melt off a part of their armor with corrosive damage. Shooting every enemy you see allows your other weapons to finish them off in their weakened state.

With this build, you should go for 4 to 3 60/60 dual stat mods with Sure Shot, Stunning Speed, and Embedded Catalyzer to get the highest possible status chance for your weapon to make sure you use less ammo on a single target to get maximum stacks of status effects.

More of a hybrid build of corrosive damage and IPS physical damage with a huge buff to critical chance and damage, this build allows you to pretty much fight against most enemies with the only downside being shields where you would need to rely on impact damage.

With Hydraulic Crosshairs and Primed Pistol Gambit for critical chance and Hollow Point along with Primed Target Cracker, you can boost critical damage to make sure that every hit deals maximum critical damage on both body shots or headshots.

The Twin Grakatas has above average fire rate making it great for critical builds so with Rivens, it can be more focused on critical chance and damage with either a damage boost or elemental damage to take advantage of the innate multishot it has.

These are the best possible stats for the Twin Grakatas Riven in order of priority.

These are the highest possible stats that the Twin Grakatas Riven will have.

The Twin Grakatas have quite the following due to them being Clem’s signature weapon. Although more of a novelty weapon rather than a powerhouse, its has a reliance on Rivens to become viable for higher tier missions. This weapon offers you the opportunity to shower enemies with a heap of bullets in mere seconds.

Overall since it’s a low mastery weapon, the Twin Grakatas can serve you until you complete the star chart. Afterwards, if you would still want to use these weapons in higher tier missions you would want to invest in a good riven for it that matches what you want to improve on your style of play with the Twin Grakatas.