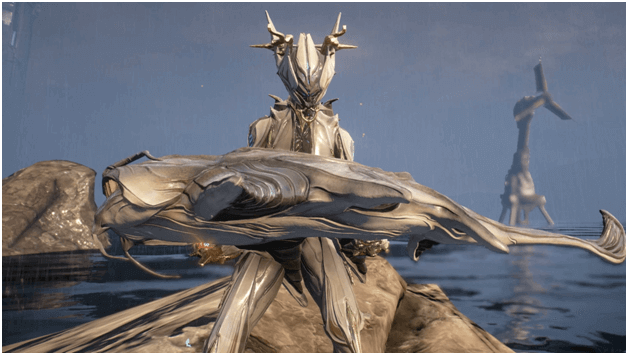 Warframe may be packed with all kinds of action where you slaughter countless enemies and push forward against the different factions in space but there is more to the game than violence. Fishing was introduced when the Plains of Eidolon came into existence and later on Orb Vallis came and had a different kind of aquatic life for us to catch.

Players may freely head to these open worlds to search the waters whether inland or surrounding them to search for fishes that they can use for later on. Fish or servofish have different uses which players put to their needs and likings which range from using them as trophies or turning them into provisions.

We have prepared this fishing guide to get you up to date or to remind you of all of the things you need to know when you are fishing in Warframe.

How To Fish In Warframe?

In Warframe, you will need a fishing spear, which can be purchased with standing in Cetus or Fortuna. It is also possible to receive a fishing spear upon reaching a higher rank. When it comes to how to catch fish, simply equip your fishing spear when you are near water that is deep enough and wait until you see fish swimming around. Aim your spear at the fish and use your primary attack button to throw the spear at it.

Successfully hitting the fish will damage and most likely capture the fish and depending on which spear you are using; the capture of a fish is sometimes guaranteed. Some spears may be different and one may be less effective than the other, making it necessary to collect all spears eventually. 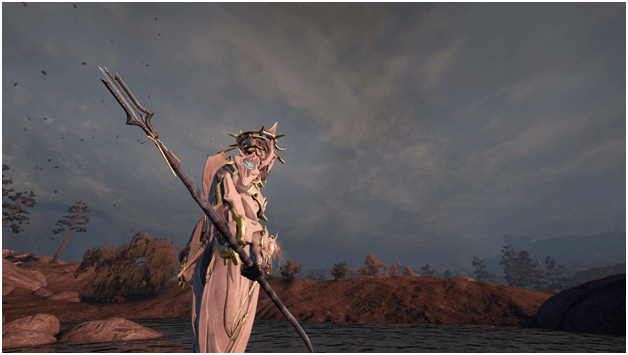 Where To Get Fishing Spear?

There are two locations where you can get fishing spears in Warframe. You may purchase three different types from Hai-Luk in Cetus. This NPC sells more traditional spears as well as other fishing-related items.

Fortuna also has an NPC named The Business who sells fishing spears that appear to be way ahead when it comes to technology in comparison to the spears from Hai-Luk. The Business sells two types that were mainly introduced for fishing in Orb Vallis.

These fishing spears may be interchanged and used on any of the open worlds for fishing, however, not all types work the same on different fish.

Basically there is no best fishing spear because each spear is stronger against a certain type of fish. This is applicable to the fish that can be caught in the Plains of Eidolon. Servofish are easily caught with the fishing spears that can be obtained in Fortuna but these differ slightly once you shift to the better one.

Fishing in the Plains of Eidolon will allow you to come across several organic fish which differ from each other in ways of having thicker skin, carapaces, and scales.

The Lanzo fishing spear is a barbed spear made specifically for penetrating fish with smoother skin that deals impact damage to fish. It is the best fishing spear for catching:

The Tulok fishing spear is a slender spear made specifically for penetrating thick armor-plating or carapaces and deals puncture damage. This is the best fishing spear for catching:

The Peram fishing spear is a multi-bladed spear that allows you to pierce the hides of scaly fish, which deals slash damage. It is the best fishing spear for catching:

You are bound to find a stranger type of fish in Orb Vallis as these are more robotic than organic and are easily caught using the electrical capabilities of the Fortuna fishing spears. These are meant to shock the Servofish so that they may be captured.

The Shockprod Fishing Spear is the cheapest and first of two fishing spears that you may obtain in Fortuna. This can be received as a reward or purchased with standing. When a fish is hit with this fishing spear, an electromagnetic pulse is discharged and will stun the fish it hits.

The Stunna Fishing Spear is similar to its predecessor, the Shockprod Fishing Spear and this is because it also releases an electromagnetic pulse but the area that it affects is larger. This allows you to catch multiple fish easily as each hit will stun fishes within an area. 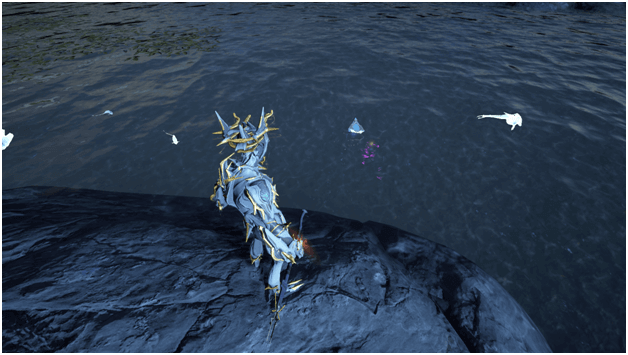 Bait can be used to attract rare fish which are higher in value or may have certain parts that you will need later on. You can craft bait after purchasing their blueprints from their respective shops. To use bait, you need to simply equip it in your gear before heading into an open world and toss it once you have your fishing spear selected.

Some fish may only be caught if you use specific bait that attracts them, which will require you to move up the chain by catching common fish to craft the higher baits.

To make fish easier to see, one can apply a dye to the water to highlight the fish. Rarer fish may be caught by luring them using special baits. 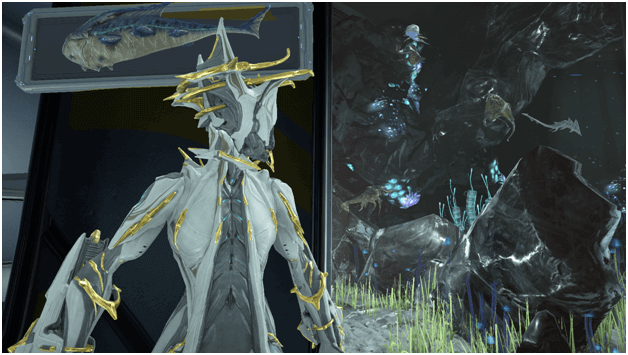 Fish that you catch can be used in different ways. You can have them processed, provide them to feed the inhabitants of either Cetus or Fortuna, display them on trophies or keep them in your fish tank in your orbiter.

Players can catch almost anything they catch to their fish tank located within their orbiter. Once fish has been added to the fish tank, they will be seen swimming in place (for large fish) or swimming around the tank (small to medium fishes). This counts for both fish and servofish.

Players use this to decorate their interior by bringing more life to the orbiter and find it fun to have their very own fish tank and aquatic pets inside.

Fish can be mounted as trophies on walls, provided that the blueprint for the trophy mount has been purchased from either Hai-Luk (Cetus) or The Business (Fortuna) and crafted afterwards for the specific fish or servofish. 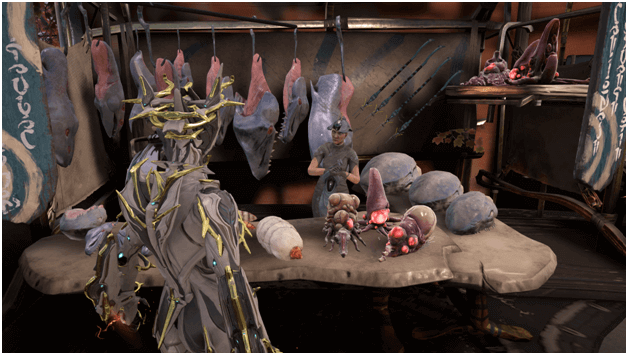 This allows you to donate fish to feed the people of Cetus. In return for providing them with fish, you will reward you with Ostron Standing which you can use when purchasing from the NPC’s in Cetus. This may be done by heading to Fisher Hai-Luk and selecting the “Provide Fish” option.

The type and size of fish you provide will determine the amount of Ostron Standing that you receive in return.

Cutting your catch will allow you to select different types of fishes which you may then collect parts from. This removes the fish and provides you with fish meat, fish oil and fish scales along with a specific part depending on which fish you cut up. You can cut fish by heading to Fisher Hai-Luk and selecting the “Cut Fish” option.

The type of fish you select will determine the bonus parts that you receive while the size determines how much of its meat, oil and scales you will receive. Different types of fish may provide different amounts of the basic resources.

Multiple fishes will be selected but the amount of resources that they provide will be fixed per fish. 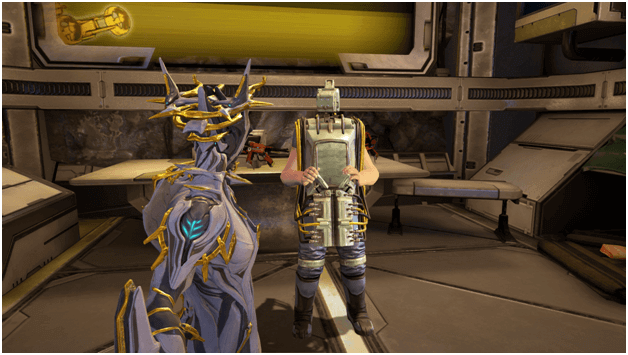 The type and size of servofish you provide will determine the amount of Solaris United Standing that you receive in return.

You may select multiple servofish but the parts you receive from them are calculated per fish.

There are currently two planets where players can fish. The first is on Earth where they can catch fish in the Plains of Eidolon while the second is Venus where players may catch servofish in Orb Vallis.

This section includes the types of fish you will obtain in either Plains of Eidolon or Orb Vallis, the resources from each fish as well as the quantity as well as the biomes and time of day which need to be met in order to capture such fish or servofish.

The fish in the Plains of Eidolon are rather more organic compared to those on Venus and can be caught using the most primitive of spears. These fish are gathered for their fish oil, fish meat and fish scales.

At one point as you progress through Cetus/Plains of Eidolon, you will need to go through a bit of Fish Oil farming to craft most of the items or equipment you obtain in Cetus. This serves as a Cetus fishing guide.

Venus has rather strange and mechanical fish that are called Servofish which are usually gathered for their parts and Scrap. This serves as a Fortuna fishing guide.

There are several fishing spots in both the Plains of Eidolon and Orb Vallis. Each world has different fish and amongst them, several different fishing hotspots which players would choose amongst to determine their best fishing spots. Below are the locations where you can find each fish.

Some players may notice fish not spawning but this may happen if they try to rush the process. Simply wait a while and use dye to make it easier to spot the fishes.

We have prepared two fishing maps for you to use, one for Plains of Eidolon and another for Orb Vallis. 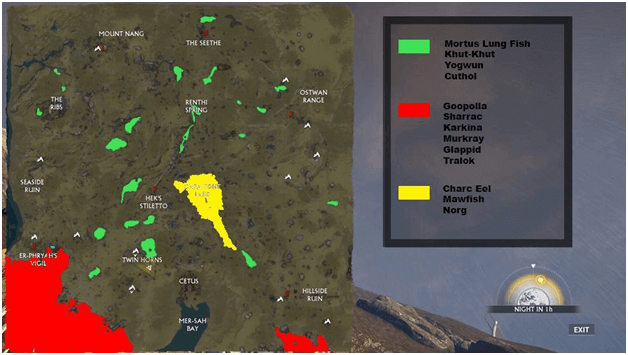 This Plains of Eidolon fishing map has complete coverage and may help you in finding the fish you need whether you are searching in lakes, ponds or the outer waters. 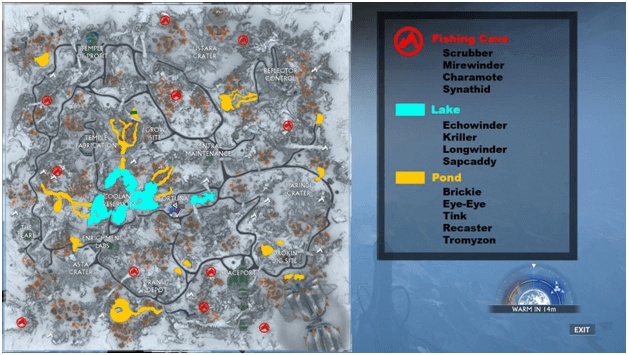 This Orb Vallis fishing map will help you locate the certain types of servofish that you may find in the area which includes the fishing caves, lakes and ponds. 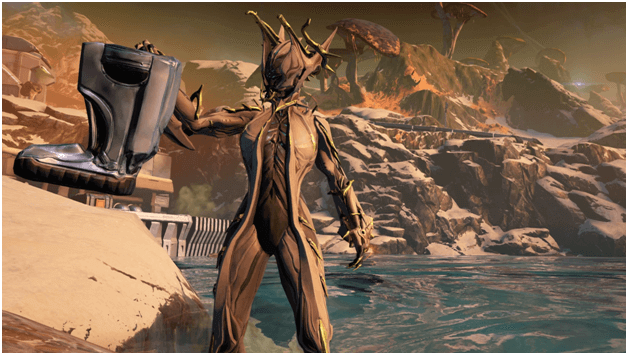 It is a rare occurrence that you will be able to “catch” a boot when fishing. This can happen when you do not hit a fish and will eventually happen while anyone fishes. Players may get a regular Boot in the Plains of Eidolon and a Crewmen’s Boot when in Orb Vallis.

A player who is intentionally trying to obtain a Boot or a Crewmen’s Boot may simply equip any fishing spear and intentionally use it without aiming for a fish or in an empty area. Once a boot has been acquired, a different tune will play which appears to be a more comedic occurrence for players.

To add more humor to the fact that you may obtain a boot while fishing, you can purchase a mount for it and use it as a decoration. Some players refer to this as the fishing boot and some even brag about it for kicks.

While Pharoma does exist, most players do not tend to use it. For those that do, they get a slightly easier fishing experience since fish won’t usually run off. It is possible to get an insane number of fish in a single session by simply focusing on farming in free roams.

This makes it easier for players to farm fish oil and other resources that can be obtained by fishes. This fishing guide serves as a good reference for the locations where you can find specific fish and the means to do so.

Aside from the standing that fish can provide and the resources you may receive from having them processed, they make good decorations and are nice to display.