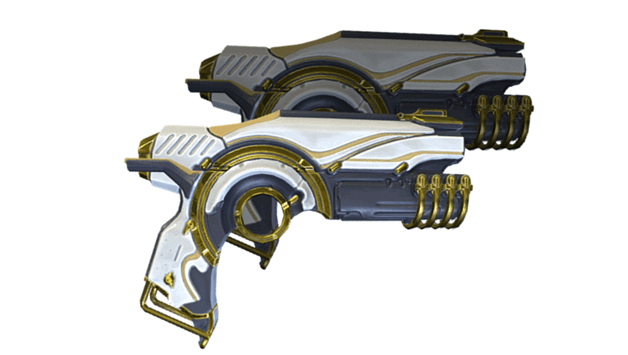 The Aklex Prime is the akimbo Prime variant of Lex Prime, the Aklex however only provides an increase of fire rate, recoil, and magazine size compared to the stand alone version.

A common weapon in the hands of Tenno that love to hear a great booming sound from their weapon the Aklex certainly delivers that in pairs as these powerful hand cannons not only sound amazing but also hit with deadly force.

How To Get Aklex Prime?

The Aklex Prime being a prime weapon can only be attained by opening up relics of the corresponding weapon part which is the Aklex Prime Blueprint and Aklex Prime Link. The relics needed to be unlocked are exclusively available for purchase by Ducats only from Baro Ki’Teer.

The Aklex Prime are Tenno heavy pistols that have high puncture damage great for dealing with heavily armored units that have an increased magazine count compared to the solo version with higher recoil being that it is an akimbo weapon.

This build uses high damage mods with a combination of radiation and toxin along with a boost in its critical stats to maximize damage for every shot, making this build an ideal weapon sidearm for hard hitting loadouts.

Using Magnum force lowers the accuracy a but adds a significant boost to damage along with Hornet Strike. For elemental damage, Primed Heated Charge and Pathogen Rounds mods will provide maximum elemental damage while critical stat mods like Pistol Gambit and Target Cracker will give the extra boost in damage by increasing critical hit chances.

This build focuses more on the base physical stat of the Aklex Prime and at least one element to take advantage of enemy weaknesses. It also adds more damage to the mod setup for the Aklex Prime while providing an increased fire rate.

Barrel Diffusion and Lethal Torrent take care of the negative setbacks of the Aklex, mainly its fire rate. Multishot gives the weapon a free extra bullet with every trigger pull towards your target, while Lethal Torrent also provides a direct increase to fire rate.

The Aklex Prime is viable for status chance build, having high base damage ensures that the weapon takes full advantage of the elemental weakness of your targets. At the same time, it inflicts stacks of negative status effects with every shot.

Using four 60/60 mods and Sure Shot increases the status chance a bit over 100% and Stunning Speed also adds a bit of a boost to that status while providing an increase in reload speed. Barrel Diffusion will add multishot to provide an increase to damage while letting the Aklex Prime release more bullets with each shot to increase the chance of status effects occurring.

Using Synth Charge on the Aklex is a good choice for a special mod for this weapon due to its ability to increase the damage of the weapons last shot. With the Aklex Prime’s high damage, its boosted last shot can kill enemies with a single shot, making headshots or shots to weak spots more deadly.

Radiation works best for this build due to it being the least resisted element against hard to kill enemies which include those from the Grineer and Corpus factions. Adding Bore to increase its dominant physical stat puncture, for more damage against tough elite armored units.

This hybrid build improves the overall base stats of the Aklex Prime so it can be used in most missions while retaining its great stopping power and improves on one of the main setbacks of the weapon which is recoil.

With 60/60 mods, 50% status chance can easily be achieved to make sure every stack of damage can inflict a status effect. Pistol Gambit increases critical chance, complimenting the high damage output of the Aklex Prime.

Magnum Force, Hornet Strike, Auger Pact, and a 90% element mod provide a boost to damage while Synth Charge makes the last shot of the magazine from the Aklex Prime extremely powerful.

Steady Hands as an Exilus Mod for the Aklex Prime can mitigate a lot of the hard recoil of the weapon making it very accurate even if the weapon is fired in rapid succession. This will allow the wielder to unload a whole clip while maintaining aim on the target.

The Aklex Prime has great damage but has a few setbacks like its high recoil and slow reload times. As for the Riven of the weapon it will all go down to preference, so you can either go for full critical or status chance while having damage and multishot as your primary stat you would want to look for in a riven.

These are the best possible stats for the Aklex Prime Riven in order of priority.

These are the highest possible stats that the Aklex Prime Riven will have.

The Aklex Prime is Warframes version of the twin Deagles with their powerful sound and recoil that resembles the weapon perfectly and comparably its destructive potential as well. This weapon becomes very deadly in the hands of an accurate user as they can deal severe damage from any range.

As a pair of deadly pistols, the Aklex Prime can be used in almost any mission as you unleash a lot of damage with every shot. This makes the Aklex Prime a favorite weapon for heavy weapons loadouts but for most that would either love or hate this pair of hand cannons, it will certainly be a blast to use them in any mission.