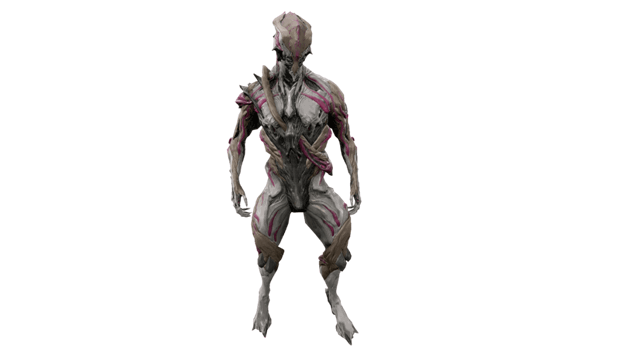 Using the strangest of manifestations, the infested Warframe Nidus dominates missions by overwhelming his enemies with his infested powers. As Nidus overwhelms his enemies in the field, he grows more and more powerful, adapting to survive and become more powerful. Due to his infested properties, Nidus has no shields but in return has a large health pool.

Nidus is capable of unleashing his infestation to cause ruptures with tendrils to damage enemies,  spawning larvae to latch on and hold his victims, create Parasitic Links to benefit himself or allies and even unleash his own swarm of maggots to attack his enemies.

Nidus’ abilities focus a lot on being able to damage enemies and as missions prolong, Nidus becomes harder to kill and is capable of dealing more damage. Nidus is both a tank and a nuker Warframe, but he is also capable of supporting his allies with his Parasitic Link and his Ravenous abilities.

How to Acquire Nidus?

In order to get the blueprint for Nidus, you will need to complete “The Glast Gambit” which is a quest involving Nef Anyo and the Mycona Colony as he has stolen their children. You will partake the quest and become introduced to The Index where you will fight for their possession.

After playing through the quest, you will be rewarded with Nidus’ blueprint, while the rest of his parts can be acquired by doing the Oestrus Infested Salvage mission located on Eris. Nidus’ components have a chance to drop every rotation C.

Also Read In Detail About: How To Get Nidus

Nidus builds up stacks whenever he uses his Virulence or Ravenous abilities, increasing his stacks depending on the number of enemies hit. Every 5 hits, a cycle is completed, and a Mutation Stack is gained. These stacks are required for some of Nidus’ abilities and as they increase, so does the effectiveness of the abilities he casts.

Stacks can reach a total of 100 stacks and will be drained by 1 for Parasitic Link and 3 for Ravenous. Upon taking fatal damage, Undying will become active, consuming 15 stacks and preserving Nidus by restoring 50% health and making him invulnerable for 5 seconds.

The Abundant Mutation augment further increases the amount of stacks Nidus may have to 50/100/150/200 stacks in total. 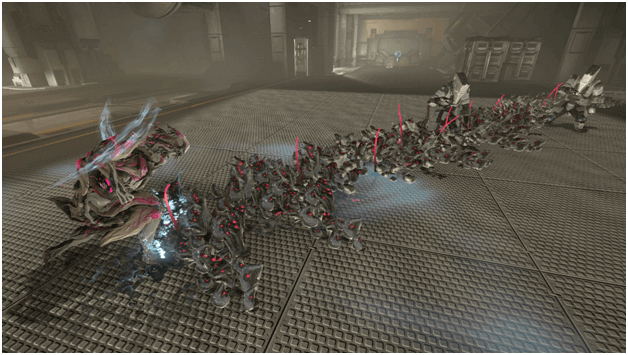 Nidus stomps on the ground, forcing fungal growth to rupture out of the ground, dealing 150/160/175/200 damage to enemies within a range of 10/11/13/16 meters. The rupture is seen as a line of infestation and enemies within 4 meters of it will be damaged.

Enemies hit will add to stackers per every 5 enemies and each enemy will refund 25% of the energy consumed. 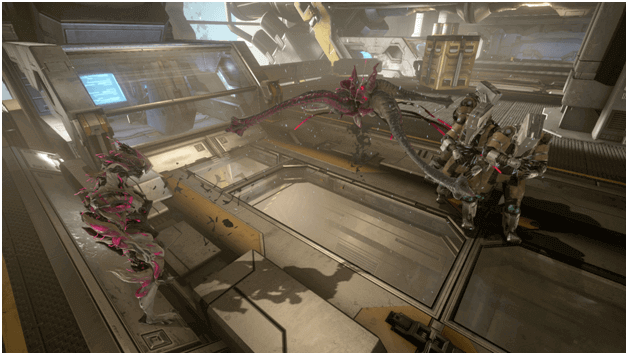 Nidus launches an infested pod that erupts, releasing tendrils that latch onto enemies within a radius of 8/9/10/12 meters, pulling them in and holding them in place for a 4/5/6/7 seconds. 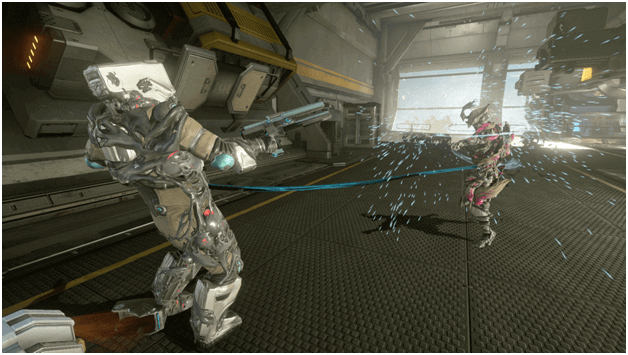 Binds Nidus to a target, friends or foe, causing allies to have increased 10%/15%/20%/25% increased strength, while enemies that have been latched on too will take 20%/30%/40%/50% incoming damage that Nidus should take, preventing Nidus from receiving damage. 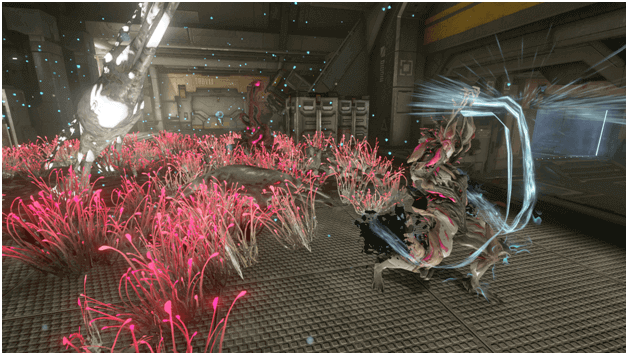 Nidus spawns infestation from the ground, constantly summoning maggots to burst out and attack enemies, exploding on them for 100/110/125/150 damage. The infested area also allows allies to regen by 10/13/16/20 health per second. Explosion radius is ranged at a base of 4 meters.

The infestation lasts for a duration of 25/30/35/40 seconds and will continuously spawn up to 9 maggots for as long as it is active.

This build is a starter build for those who have just gotten Nidus or those who need a basic build to start off with. This build allows Nidus to effectively use all of his abilities as well as provide him with the capabilities of regenerating energy via the Hunter Adrenaline mod to feed the Virulence ability energy.

Using this build, players can survive higher level missions and last long during endless ones provided they are able to generate stacks and use Nidus at a beginner to moderate level.

The Nuker Build for Nidus has a reduced amount of duration since this has been traded off for other stats and due to the fact that Larva will not need to last so long. Your main source of damage will be using the Virulence ability, gaining stacks and damage as you continuously use it against your enemies.

Having a high ability efficiency will cause Virulence to cost less energy and allow it to replenish more, making it easy to kill enemies that you have caught with Larva. Your basic combo will be casting Larva and using Virulence repeatedly.

This build focuses on using Larva to latch on to enemies and bring them to an area. With a high amount of ability efficiency, energy costs are reduced to extremely low amounts but in exchange, duration and ability strength are reduced.

The main purpose of this build is to get all your enemies into one spot to finish off. This works well with special missions like The Index and allows Nidus to act as a support Warframe. The heightened range will allow enemies to be pulled from very long distances, guaranteeing areas are easier to clear.

A slightly different build going for boosting Nidus weapon damage, the Teeming Virulence Build makes use of the augment to give Nidus an increase in critical chance whenever he hits 4 enemies with the ability. The mods in this build cause the critical chance to increase up to 405% while the duration lasts for 19 seconds.

This allows Nidus to easily get critical chances by simply using Larva to drag enemies together so that he can use Virulence on them. Numerous enemies make things easier for this build and the damage possibilities can reach insane levels due to the high critical chance.

The Lava Burst augment didn’t come as soon as Nidus’ release but when it did, Nidus became a good AOE nuke Warframe. One of the most annoying things about Larva was that you could not cancel it and you had to wait for it to end. With the Lava Burst augment, not only can you stop it, it now has AOE damage.

This build allows you to use Larva at a lesser energy cost while giving the benefits of the augment. This allows you to kill several enemies easily. The damage alone is already high, and this is increased more by the ability strength mods that have been added. More enemies will mean more damage since each enemy adds more to the damage dealt.

Like the Nidus Nuker Build, this build is focused on causing as much damage to enemies but with a boost of having an even larger amount of mutation stacks. With the additional 200 mutation stacks, Nidus’ abilities will be able to do even more damage and he will also have more chances when put in a critical situation.

This build is great for endless missions as the stacks alone can cause Nidus to do an extremely high amount of damage, killing enemies that are level 100 and above within a few hits. With 100 stacks, Nidus is already capable of killing swarms of enemies easily, imagine what he can do with 300.

There are a few ways to use Nidus and many like him for his ability to handle hordes of enemies easily. The sooner Nidus can build up his stacks, the sooner he can carry until the late game. Endless missions such as survival and defense are easily done due to Nidus’ ability to pile up enemies and finish them with his Virulence, with the additional damage from Ravenous.

Nidus is more of a tank than other Warframes although he has no shields. This makes it easy to build for defense with health or armor mods and players can make use of him when hunting corrupted mods since the Decaying Key can be equipped (reduces shield), having no negative effect at all since he has none.

Being a combination of a damage dealer and a tank, Nidus makes quite the combination of his abilities to heal allies with Ravenous and to buff them with Parasitic Link making him quite a supportive Warframe.