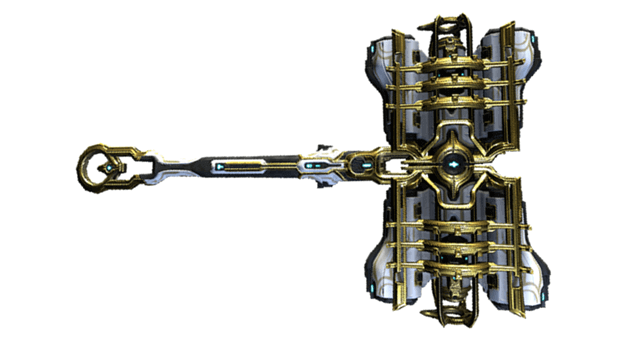 The Fragor Prime is the prime variant of the Fragor which has increased critical chance but has a slow attack speed with an innate passive of having a default starting combo counter of 30 hits.

Often the original Fragor is the first hammer most Tenno uses in their early stages making the fragor prime a common weapon for most Tenno to have in their arsenal.

Those who use the Fragor Prime however find it a powerful critical based weapon making every hit although slow sends enemies flying.

How To Get Fragor Prime?

The Fragor Prime is a Tenno is a high impact hammer with a 100% increased base critical stats compared to the original Fragor along with a slight improvement on damage. This weapon has the third highest base damage of all hammers in Warframe.

The Fragor Prime initially has one of the highest base damages amongst all of the the other hammers in the game which gives it an edge over almost any melee weapon. With this damage we also make use of its high critical chance as well as its high critical damage multiplier. Adding the Organ Shatter and True Steel mod push this weapon more towards its critical edge while Berserker helps us maintain speed.

The Fragor Prime’s Maiming Strike build sacrifices its elemental prowell and retails its physical damage but with the help of Heavy Trauma (or Primed Heavy Trauma) we get a large boost in damage. Spoiled Strike is added to the build to further increase the damage while Berserker is set in to counteract its reduction to attack speed.

With this build, you can do significant damage due to the mods equipped as well as the weapon’s base damage and critical attributes. Maiming Strike works as either a spin to win option or a combo finisher that you can insert into your combos as you fight enemies.

The addition of the accumulated combo meter adding to critical chance, the weapons critical chance and the Maiming Strikes critical spin attack allow the Fragor Prime to deal devastating damage to enemies.

As an upgrade from its predecessor, the Fragor, this weapon has an increased status chance which can be modified to reach a good 68.4% which is pretty high for a melee weapon that is meant for critical builds. The Fragor Prime will be capable of inflicting status effects at a good chance due to the build.

Combining the 60/60 mods, you get 2 elemental combinations to go along with the status chance. We have added Weeping Wounds to further increase the status chance when your combo meter is active. In the event that you do not have Weeping Wounds, you can substitute it with a mod for attack speed such as Berserker or Fury.

Due to the high status chance and/or attack speed depending on if you replace Weeping Wounds or not, this build is capable of inflicting status effects easily with a high chance per hit.

For those that like to mess around with their targets, a hybrid build is available. This combines both critical capabilities and statu chance infliction. You will be able to deal damage from multiple sources with this build which include critical strikes, damage from status effects, damage over time from certain types of statuses.

The main use of this build is to deal a good amount of damage, bypassing enemy defenses depending on the status effect you can inflict in order to deal successive damage to the enemies. A few whacks from the Fragor Prime will surely inflict enemies with a status effect and afterwards, you can finish them off with your critical strikes.

The Gladiator Build is an altered version of the Critical Build but has certain mods swapped out and other retained in order to focus purely on dealing critical damage. This marks use of the Gladiator mods different stats as well as their set bonus which works similarly to Blood Rush. The combination of Blood Rush and the set passive of the Gladiator mods can ensure you will be seeing red crits in no time.

In order to keep your damage up, all you need to do is continue hitting enemies and your combo meter will rise. While it rises, the Fragor Prime will begin to deal more damage due to the combo meter. In addition, since you have the set bonus of the Gladiator mods and the Blood Rush mod, your critical chance also increases with the combo meter.

For this build, the more hits you can get means the higher your critical chance will be. You can maintain the combo meter by continuously attacking enemies and by using the Naramon school.

The Fragor Prime has the third highest base damage amongst the other hammers which gives it a good amount of raw damage to work with. Having a riven that can further boost its ways to deal damage will allow you to deal a large amount of damage in a little amount of time. With the Fragor Prime, you will mostly want to focus on critical damage but other builds also work well with its base stats.

The Fragor Prime can perform exceptionally with these certain stats increased from a Riven mod.

Hammers possess some of the highest base damage in the game and the Fragor Prime is no exception. While most hammers would be thought to be heavy, you can modify the Fragor Prime to actually swing faster. Along with the different combos that are provided by stance mods, this weapon excels pretty much everywhere.

Crushing Ruin is a great stance for this weapon as it allows the Fragor Prime to easily initiate attacks. With such reach on the weapon (even without range increasing mods) you can easily move up to an enemy and attack it. The Fragor Prime was thought to merely be one of the earlier prime weapons which were made for their looks but it turns out that its elegance is also matched by its deadliness.