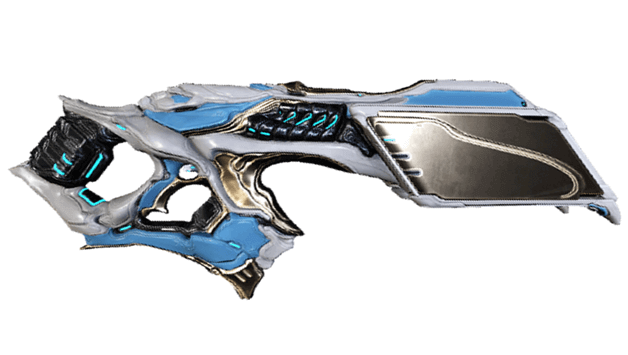 The Acceltra is one of the signature weapons of Gauss (Akarius being the other) and was introduced when he came to the game.

This weapon fires off mini-rockets as projectiles which will explode on impact after travelling at least 7 meters. Its ability to rapidly release these mini-rockets with a high critical chance makes it easy to dispatch large numbers of enemies. Running will cause the weapon to reload faster and even more so if Gauss is wielding it.

How To Get Acceltra?

The Acceltra only drops from Ur which is a Dark Sector: Disruption mission located in Uranus. You will need to play the mission through in order to kill Demolysts (Demolishers Amalgams).

The Demolysts in this mission have a chance to drop the Acceltra Blueprint when they are killed. You may need to repeat the mission multiple times in order to get lucky with the drop rate of the Acceltra.

Adding elemental mods will increase the damage of the build and this can work quite well when combined to kill specific enemy factions. Using this build will allow you to deal critical hits in a good area, making it easy to clear out enemies, some with only a few shots which can help conserve ammunition.

While the Acceltra has a better chance when it comes to dealing critical hits, we can still modify it to bolster its status infliction. This can be done by adding 4 damage and status mods along with Hammershot which brings the status chance to 25.2% but this does seem low to most players.

Regardless of the now standard percentage when it comes to the status chance, the weapons ability to fire several rounds allows it to inflict enemies and since the Acceltra’s projectiles explode, enemies in the blast radius can become inflicted if they are within range. This build is useful for dealing damage overtime to enemies and making them more susceptible to other sources of damage.

Another great build would be to combine critical hits and status effects as this can cause enemies that take successive hits to receive more damage over time. Mixing the 4 damage and status mods can cause enemies to become inflicted with status effects while the Point Strike and Vital Sense give the weapon the same critical capabilities of the Burst Critical Damage build.

This build has a good chance to inflict enemies in an area with status effects as well as deal high critical damage to them. You will be able to either quickly kill enemies or leave them on the verge of death due to the status effects that they may be inflicted with. Depending on which build you use, you can deal a good amount of critical damage and leave enemies taking damage over time.

Nothing beats a good bombardment than a rapid round of mini rockets exploding in your enemies faces and this is exactly what we do with this build. We add Firestorm to increase the radius of the explosion of your rounds and with Speed Trigger, you can deliver a large amount of damage in mere seconds. This build focuses mainly on taking out large groups of enemies and can ensure that you quickly erase enemies from the map faster than they can spawn in.

For more accurate players, you can make use of Argon Scope to boost up your critical damage. This is due to the 135% critical chance that occurs whenever you deal a headshot while aiming. Not only does this work for weaker groups of enemies, you can also use this to take out stronger ones and even bosses. You will be doing a mixture of yellow and orange crits to enemies.

One of Acceltra’s best features is its ability to deal damage in a good medium sized area. Along with its decent damage, the critical chance of the weapon can be bolstered to further cause more devastation to your enemies.

While the Acceltra has impact as its main damage stat along with slash and puncture with its radial attack, it is easy to create builds that can combine the initial impact of its damage along with the area of effect with a Riven that can increase its core stats such as damage and critical chance.

Eventually, the Acceltra is meant to be built with critical mods and adding elemental damage would bolster its capabilities even more. The best addition to further take advantage of its projectiles would be to increase its critical chance to go beyond its limit as well as to increase its damage output.

These are the best possible stats to have with the Acceltra Riven.

These are the other stats that are considered to be effective as well with the Acceltra.

The Acceltra may lack a bit when it comes to the amount of ammunition it can store but at the rate at which you can kill your enemies, you should be able to easily replenish. Should you be able to maintain a medium to distant range, your projectiles are very likely to explode on impact and damage enemies in a wide radius.