There are but 2 achievements, which you really need to know about, before actually starting the game:

Given Aloy’s actions, all possible optional allies joined the defense.

Encountered and Focus scanned every type of machine.

You need to explicitly finish a NG+ run on Ultra Hard, so play whichever difficulty you fancy for the first run.

Learned to hunt and fight alongside Rost.

Defeated the Sawtooth that threatened the Nora.

Triumphed in the Proving

Overcame adversity and placed first in the Proving.

Victorious with the War-Chief

Found the Nora War-Chief and defeated the killers in the Ring of Metal.

Fought back the corruption

Destroyed the corruption inside the Nora valley.

Saved Meridian from its foe

Learned of the ancient past

Learned of the ancient past at Maker’s End.

Infiltrated the Eclipse battle camp and crashed their network.

Discovered the truth of Zero Dawn.

Broke the siege of All-Mother

Defeated the invaders and went inside the sacred mountain.

Explored the Mountain That Fell and recovered a powerful weapon.

Up until this point, nothing is missable. So just play whichever way you want.

Given Aloy’s actions, all possible optional allies joined the defense.

In order to recruit allies, you need to finish several side quests scattered all over the map.
Some quests will only unlock later in the story, but they will stay available until the end of the game.
The first chapter of this guide will show you the point of no return.

For the complete list of allies, check the chapter right below this one.

Ended the threat of the ancient war machines. 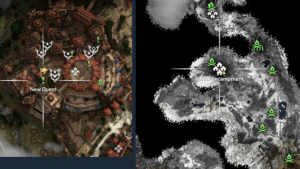 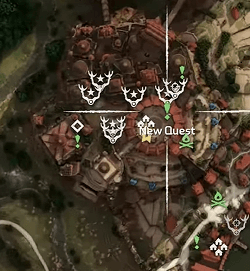 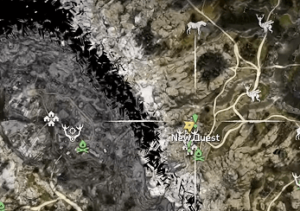 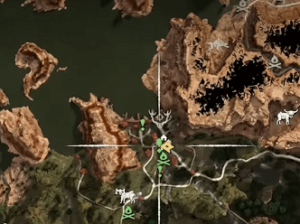 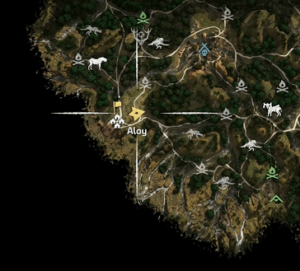 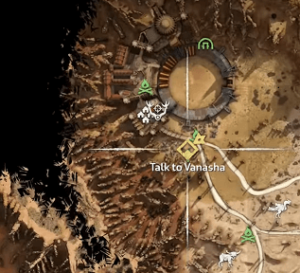 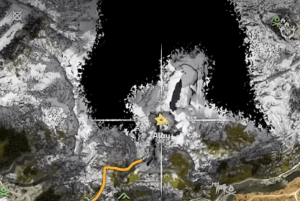 This will also unlock you:

This will also unlock you:

Rose through the ranks of the Hunters Lodge and helped Talanah defeat Redmaw.

Learned all of the new skills in the Frozen Wilds

This is rather straight-forward. Kill everything you come across, complete all quests and invest all your skill points. 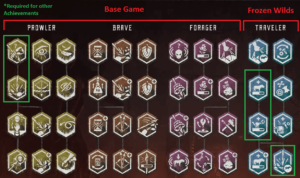 Amoung those skills, you will find what you need to unlock:

Performed a stealth kill on 10 machines.

Killed 3 enemies using the Strike from Above skill.

Used the Machine Repair or Mount Repair skill on 5 different types of machine.

Once you unlocked the skills, you shouldn’t have any problems unlocking the achievements as well.

Killed 30 human enemies by landing headshots on them.

Self-explanatory. There are by far enough human enemies in the game to unlock this without any problems.

Detached 10 components from machines during combat.

It’s completely impossible not to tore off 10 components while playing the game.
Heavy weapons on the other hand are somewhat rare.
There are but 3 machines in the game, which are equipped with such weapons:

Killed 10 machines weak to Fire while burning, or weak to Freeze while frozen.

Should come naturally. Fire and Freeze are actually really strong in Horizon, so you’d do yourself a favor by using them.

Unlocked and used the overrides for 7 different types of machine.

You’ll automatically unlock the ability to override machines early on in the story. You won’t be able to override all machines from the get go, though. In order to unlock more overrides, you need to complete the Cauldrons (the sci-fi dungeons), which are revealed on your map by overriding a tallneck.
Here’s the full table of overrides:

All Recon machines killed
Killed at least one of every type of Reconnaissance machine.

All machines catalogued *missable*
Encountered and Focus scanned every type of machine.

Well, scan and kill every type of machine in the game.
Already killed machines can still be scanned with your focus.

You can use your notebook to check, which machines you’ve already scanned.

Make sure to scan the Non-Dinosaur machines, when you have the chance to do so, during certain main story missions!

Note, that all the achievements in this chapter exclude the DLC region in the northeast of the map.

First & All
Tallnecks Overridden Scaled a Tallneck and accessed its information.

Scaled all of the Tallnecks and accessed their information.

First & All
Bandit Camps cleared Took back a settlement from a bandit clan.

Took back all settlements from the bandit clans.

Killed all the corrupted machines in every Corrupted Zone.

First & All
Cores Overridden Reached the Core of a Cauldron.

Reached the Core of every Cauldron.

All Suns
– at one Ground
– at all Grounds

Blazing Suns
– at one Ground
– at all Grounds

These achievements are pretty self-explanatory.
Override all the Tallnecks and the locations for the other activities will be revealed on the map.

First & All
Vantages found Found and accessed a Vantage datapoint.

Found and accessed all of the Vantage datapoints.

Found all of the Metal Flowers.

Found all of Arnak’s figures.

First & All
Ancient Vessels found Found an ancient vessel once used by the Old Ones.

Found all the Ancient Vessels.

You can actually buy some maps at most merchants under the “Special Items” tab, which roughly display all their locations. 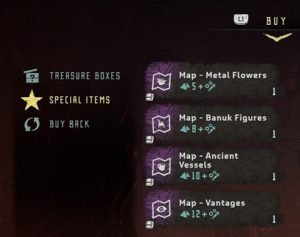 That being said, here are a few further hints on how to locate them exactly:

Used a Weapon Coil or Outfit Weave on a modifiable weapon or outfit.

Modifications are uncommon drops from killed machines.
To use them, open your menu, go to crafting, choose weapons or outfits, pick a weapon/outfit with an empty slot and choose a mod to equip.
You’ll be given your first outfit with a slot just before the Proving.

Found and knocked over all of the Grazer training dummies in the Nora region.

Here’s a screenshot with all locations: 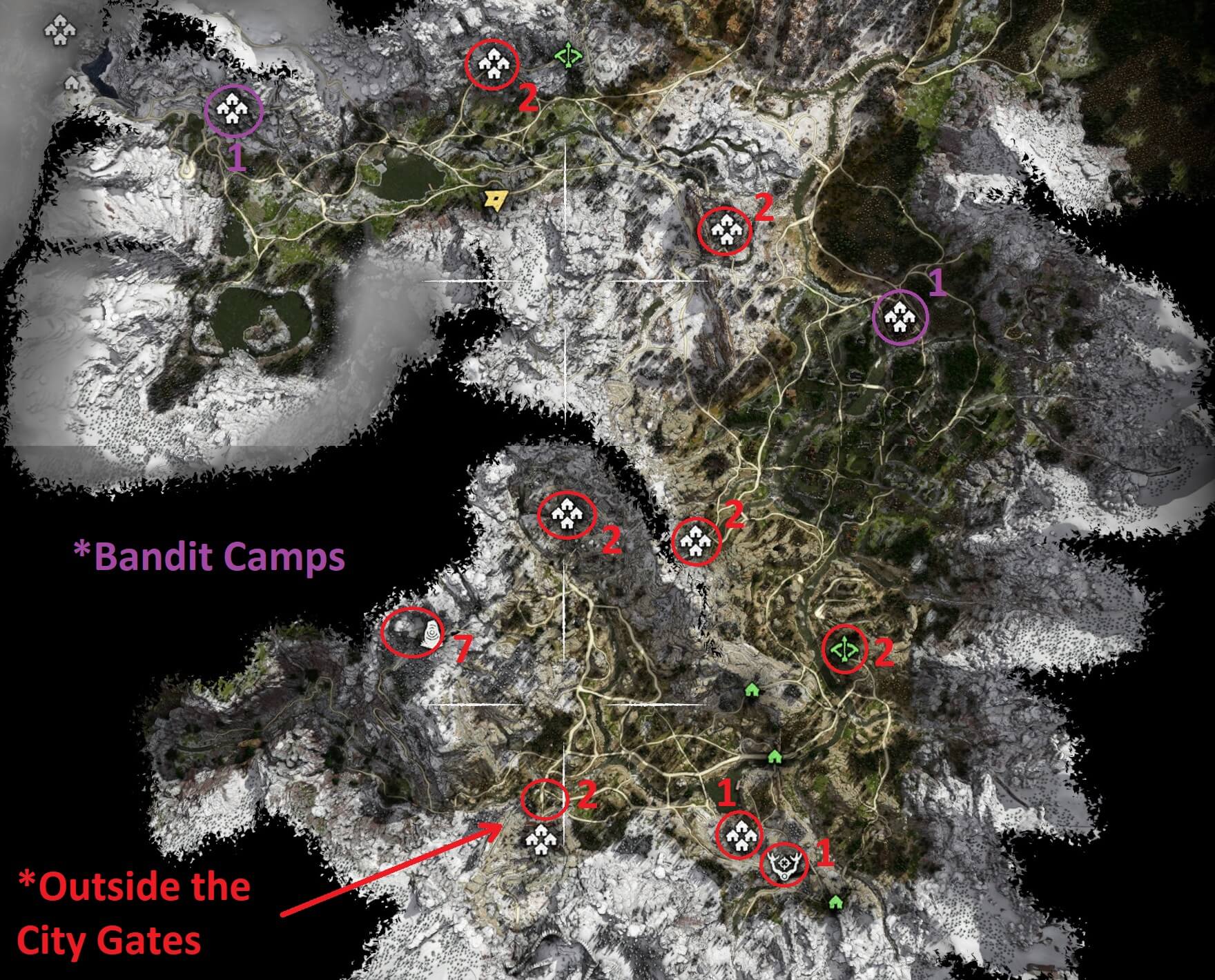 Recovered an ancient technology and put it to use.

Yes, the DLC is already included and does not need to be purchased separately.

All of the achievements below refer to the snowy area in the north-east corner of the map: 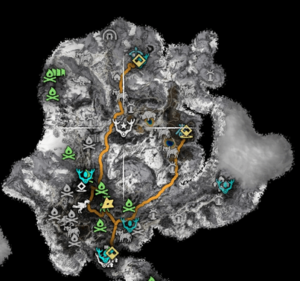 Drove out the threat within the mountain.

These 4 are the story achievements of the DLC and therefor impossible to miss.

Completed all side quests and errands in the Frozen Wilds.

Completed the Tallneck, Bandit Camp and Hunting Ground in the Cut.

Disabled all Control Towers by overriding or destroying them.

Found all of the Pigments in the Cut.

Found all of the Animal Figurines in the Cut.

Self-explanatory. Pretty identical to the base game activities.

Completely drained the floodwater from inside the Greycatch.

This is part of the side quest “Waterlogged”. While the quest itself is pretty self-explanatory, there’s somewhat of an optional pipe puzzle in the facility, which also needs to be completed for the achievement to unlock. It doesn’t matter, in which order you complete quest and puzzle.

Met Ikrie again at the Snowchants Hunting Ground and took first place
in her challenge.

Complete the side quest “Survivor”, upon which Ikrie will be unlocked. Find her at the Snowchants Hunting Ground in the north of the region and complete “Ikrie’s Challenge”.

Applied a modification to your spear.

Complete the errand “Secret Shared”, and you’ll unlock a mod slot for your spear. Put a mod inside it via the crafting menu.

Traded Bluegleam for a special weapon or outfit.

Bluegleam is a limited resource, found all throughout the Cut. Getting enough Bluegleam for one trade is super easy.

Fully Improved Weapons
Acquired the improved versions of three weapons from Varga
Find Varga, a merchant in the south-east of the new region.
Once you’ve aquired the Forgefire, the Stormslinger and the Ice Rail, which are awareded for completing the main mission of the DLC as well as killing the leader of the only bandit camp, Varga will give you 3 errands to gear up the 3 before mentioned weapons. Upon completing all 3 errands, the achievement will unlock.

Killed 6 Fireclaws
Killed 6 Fireclaw machines.
Well, have fun with the DLC exclusive machines. Killing the 6 fireclaws can only be done, after completing the DLC’s story.
Written by: Brachragon